Choose your CD format
or order disks individually: Add to Cart Add to wishlist
Play a sample episode from March 15, 1958: 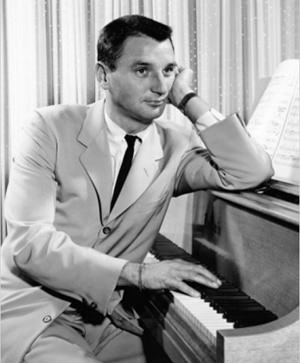 "... A Program filled with the exciting and scintillating rhythms of America's Own music."

Stars Of Jazz comes to us from the Armed Forces Radio Service. It was an attempt to give listeners an education and appreciation in the American art form of Jazz music.

The show is hosted by notable jazzman Bobby Troup. A graduate of the University of Pennsylvania, Troup's earliest musical success was a regional hit, "Daddy", which went on to become a number 1 hit for Sammy Kaye and his Orchestra in 1941. Troup was a captain in the Marine Corp during WWII.

He was the first white officer to command an all black unit in North Carolina. The prejudice of the time forced the unit to live in tents. Troup had his troops build quonset huts, a night club, a boxing ring, and other facilities. Very soon, Marines from the white units were finding excuses to spend time in the black area of the camp.

In addition to Daddy, some of Troup's other compositions include "(Get Your Kicks On) Route 66", "Snootie Little Cutie", and Little Richard's 1956 hit "The Girl Can't Help It".

The mid-50's NBC TV game show Musical Chairs, featured Troup, along with Mel Blanc and Johnny Mercer, on its regular panel. About the same time, Troup hosted an ABC program, Stars Of Jazz, which featured Jazz greats who were working in the Hollywood area

In 1955 Troup produced torch singer Julie London's hit "Cry Me A River". London divorced Dragnet creator and Jazz fan Jack Webb the year before, and married Troup on New Years Eve, 1959. When Webb created the hospital drama Emergency for television, he cast London and Troup as nurse Dixie McCall and the laid back Dr. Joe Early.