Best remembered for his fantastical machines, Rube Goldberg delighted readers with his cartoons for decades.

Choose your CD format
or order disks individually: Add to Cart Add to wishlist
Play a sample episode from January 30, 1930: 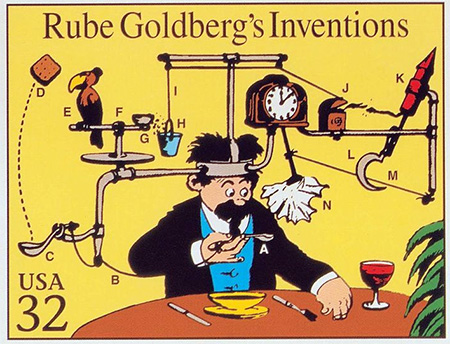 "Necessity is the mother of Invention" is common wisdom and a true enough sentiment. Throughout history, when something needed to get done, sooner or later someone would come along and invent a way to do it, or more importantly, a better way to do it. With the relationship between Invention and Necessity firmly in mind, we offer a fun corollary, "Rube Goldberg was the Father of Invention".

This puts Goldberg's relationship to inventiveness in the same category as the typical buffoonish situation comedy dad. Anyone who has watched a Rube Goldberg machine in action can agree that there is an endless delight in seeing the various parts working their circuitous way towards the often-frivolous goal. This helps to explain the phenomenon of university engineering departments holding intense competitions to see whose students can create the most spectacular and delightful Rube Goldberg devices. 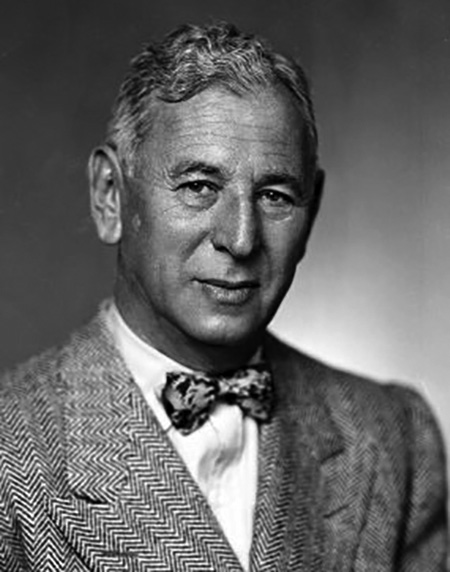 A Rube Goldberg machine is defined as one which performs a simple task in an over-complicated and sometimes improvised manner. Describing such a mechanism as "Rube Goldberg" is fun to say, but most people have forgotten that Rube Goldberg was, in fact, a real person.

Reuben Garrett Lucius Goldberg was the third of seven children born to San Francisco police and fire commissioner Max Goldberg in 1883. Little Reuben began tracing and sketching at the age of four and was taking professional drawing lessons by the age of eleven. He graduated from the University of California, Berkeley, in 1904 with a degree in engineering and worked for the San Francisco Department of Water and Sewers. After just six months in city government, Goldberg took a job with the San Francisco Chronicle as a cartoonist, eventually seeking fame and fortune at the New York Evening Mail.

Goldberg's cartoons for the Mail were some of the first nationally syndicated cartoons, and he was a prolific comic artist who often had several strips running simultaneously. His political and editorial cartoons earned him many enemies (during WWII, his sons were forced to use different surnames) but his best-remembered illustrations were of a character named Professor Lucifer Gorgonzola Butts. Professor Butts was based on two engineering instructors Goldberg studied under at Berkeley (and whose classes bored him to no end). The bushy-mustached Butts was drawn in schematic illustrations of the comical inventions which would become immortal as Rube Goldberg Machines.