A daily thirty minute transcribed segment of songs, jokes and some poetry that built on the success of Don McNeill's Breakfast Club.

Choose your CD format
or order disks individually: Add to Cart Add to wishlist
Play a sample episode from December 01, 1936:

"The Refreshment Club ... electrically transcribed for radio and presented by the Coca-Cola Bottling Company…"

After being wounded in the Civil War and becoming addicted to morphine, Colonel John Pemberton began developing patent medicines to help kick the dangerous opiate. Eventually, he struck upn the formulation which would become Coca Cola, now considered the most valuable brand in the world.

The brand grew through the years thanks partly to the refreshing flavor of the drink, but mostly through a shrewd and aggressive marketing tradition. The distinctive cursive writing on the bottles and advertising media was first created by Pemberton's bookkeeper. The distinctive "contour bottle" was developed so that it would be recognized even if someone felt it in the dark - you can even tell a Coke bottle when it is broken!

Advertising has been an important part of Coca Cola's marketing. One of the first coupons was a card that could be exchanged for a free glass of Coke at a soda fountain. Coca Cola redeemed 8.5 million free Coke tickets between 1888 and 1913. The media may have been the biggest beneficiary to the growth of Coca Cola, with ads in print, on signs, and of course on radio.

In the late 1930's, Coca Cola sponsored The Refreshment Club, a daily thirty minute transcribed segment that built on the success of Don McNeill's Breakfast Club. McNeill was considered a pioneer for proving that a morning talk and variety format would work on the air, and "the Breakfast Club" name is still used by several morning shows around the country. 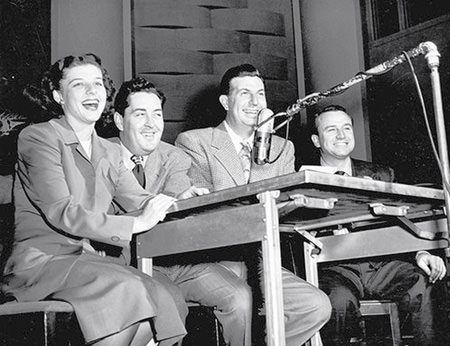 The Refreshment Club allowed McNeill to take a similar format to an afternoon audience. This was before the Soaps began to dominate the daytime airwaves, and the music, skits and talk were aimed squarely at the housewife. Which made good sense, since she was the person who would bring home those refreshing bottles of Coke in the convenient next cardboard cartons which held six bottle.

Each broadcast would open with a roll call of the "club members", the singers, comedians and orchestra who made up the cast. McNeill brought heartthrob singer Clark Dennis from The Breakfast Club to The Refreshment Club. After a stylized pouring and drinking of the daily bottle of Coke, the audience is treated to a half hour of songs, jokes and some poetry read by McNeill.

The program is very well done, as the sponsor would have expected, and it makes an interesting contrast with newer, more polished variety programs from the forties which were built around a popular star, like The Jack Benny Program or The Bob Hope Show. Probably the biggest contrast is with Bing Crosby's various efforts, since Bing is the consummate crooner, and The Refreshment Club was a pre-crooning production.