Hosted by Frank Gallop, the show featured Al Goodman and His Orchestra whose sound was decidedly more symphonic than most big-band outfits on the radio.

Choose your CD format
or order disks individually: Add to Cart Add to wishlist
Play a sample episode from March 25, 1945:

"Beat out the Rhythm on the Drum" What an exciting time 1945 must have been. The War was all but won, our boys would soon be coming home, and the country was poised on the leading edge of an economic boom which would set the prosperous tone of the post-War years. Although most were simply happy that The War would end and their loved ones would be home, there must have been some anticipation of the coming boom, but remember that before everyone began shifting their focus toward winning the War, the country was struggling to come out of the Great Depression.

Excitement over the coming boom would have been tempered with the knowledge that nothing good will last forever. Given the uncertainty which is always part of the future, it must have been a good feeling to have "a piece of the rock". 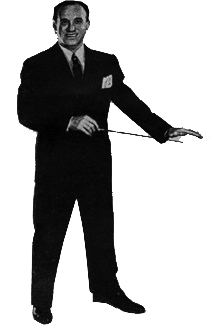 The Rock of Gibraltar has been a part of Prudential Insurance's image since the 1890's. The company was founded as The Widows and Orphans Friendly Society in Newark, New Jersey, 1875. For as little as three cents a week, a wage earner knew that if the worst should happen, his family could at least afford a decent funeral. Prudential began as a mutual insurance company, which meant that the company was wholly owned by its policyholders, and any profits would be returned to the customers in the form of dividends or reduced rates.

The Prudential Family Hour presented a weekly selection of fine music. Hosted by Frank Gallop, the show featured Al Goodman and His Orchestra whose sound was decidedly more symphonic than most big-band outfits on the radio. Soprano Patrice Munsel had the distinction of being the youngest singer to ever star at the Metropolitan Opera and was featured each week. Guests included singing talent like Walter Cassel.

AFRS de-commercialized the program and broadcast it as The Family Hour.