Nicknamed "The Scooter", Phil Rizzuto was one of the most colorful Yankees of all time and enjoyed a long broadcasting career in his post scooting days.

Choose your CD format
or order disks individually: Add to Cart Add to wishlist
Play a sample episode from May 01, 1954:

Phil Rizzuto was one of the most colorful Yankees of all time. He was born in Brooklyn, the son of a streetcar motorman. He played his entire professional career with the New York Yankees organization. 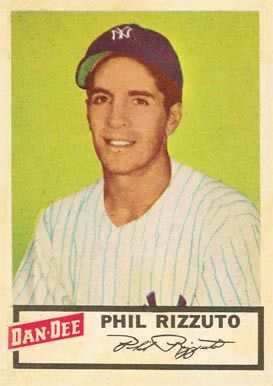 A little guy (5'6", 150 lbs) with immense hustle, Rizzuto was a "small ball" specialist. Although sluggers and dominating pitchers get all the headlines, the small-ball guys are the most exciting to watch in baseball. They rarely get to make the big plays, but they are the ones who do the little things that advance the runners, or make the saves in the field that make the pitcher look good.

Rizzuto signed with the Yankees in 1937 and entered the farm system. After being named Minor League player of the year in 1940, he "made it to the show" on April 14, 1941, combining with second baseman Joe Gordon to form an extremely strong middle infield. Grantland Rice described the combo as "a pair of light-footed, quick-handed operatives who can turn seeming base hits into double plays often enough to save many a close scrap". Like many of the greatest players of the era, the War interrupted Rizzuto's career. He served in the Navy from 1943-1945, although he played on the Navy ball team with a number of other professionals.

Just past his prime in 1954, Rizzuto went into the Michelson Studios to record Sports Caravan. The 12 minute spots allowed commercials to be added by local broadcaster. The shows opened with Rizzuto and announcer Bob Gladstone answering questions from the mailbag. The program also featured Rizzuto interviewing a popular figure from the sporting world, either an athlete or sportscaster, along with a friendly competition where two fans were told a baseball situation and asked how they would solve it from the fantasy manager's perspective.

The Yankee's released Rizzuto on Old Timer's Day during the '56 season to make room for slugger Enos Slaughter in the postseason. Friends advised Rizzuto to refrain from "blasting" the Yankees because it might cost him a non-playing job later. Sponsor of the Yankees radio broadcasts, Ballantine Beer, insisted that room be made in the broadcast booth for Rizzuto, who went on to announce Yankees games on radio and TV for the next 40 years.