Hosted by Vic Damone's hero, Frank Sinatra, said that Vic had “the best pipes in the business” promoting evaporated milk “tin cows” of the Helvetia and Pet Milk Company.

Choose your CD format
or order disks individually: Add to Cart Add to wishlist
Play a sample episode from October 09, 1948: 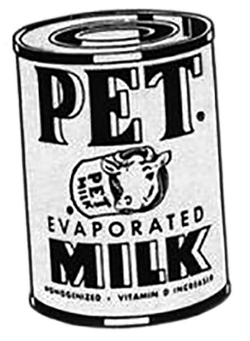 What do you do with the milk after you get it out of the cow? That is a problem which has befuddled farmers, industrialists, cooks and housewives since the dawn of agriculture. Although nature intended milk as a food for infant mammals, its many nutritional benefits for growing and adult humans has long been recognized.

For millennia, the only way to preserve the nutritional value of milk was through some sort of fermentation process, which resulted in sour cream, yogurt or cheese. Liquid milk would usually spoil without some sort of refrigeration, until the invention of canned evaporated milk.

Evaporated milk, not to be confused with powdered milk or sweetened condensed milk, is a shelf stable product which not only lasts without refrigeration but takes up half of the liquid volume of fresh milk. 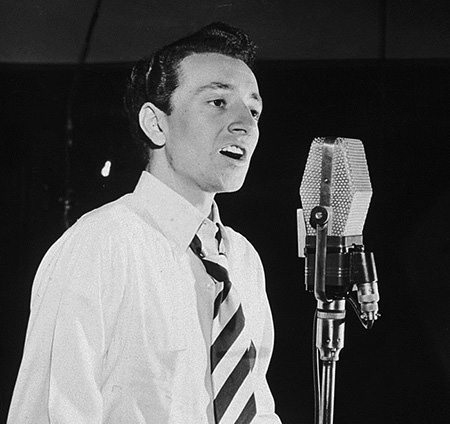 The Pet Milk Company followed the Helvetia Milk Condensing Company, whose founder, John B. Meyenberg, invented the method of preserving milk without adding the sugar used in sweetened condensed milk.

Although the "tin cows" of the Helvetia and Pet Milk company were a great way to have liquid milk without the need for refrigeration, canned milk began to fall out of favor after WWII as mechanical refrigeration in homes made fresh milk more common. One of the tactics to keep Pet Milk in the minds of consumers was The Pet Milk Program on CBS, featuring the voice of Vic Damone.

Damone was the son of Italian immigrants in Brooklyn, and he credits his mother with empowering his love of music. She scrimped to ensure that there was a dollar for Vic's weekly singing lessons. After his father was forced off the job by a work injury, Vic dropped out of school and found work as an elevator operator at the Paramount Theater in Manhattan. One day Perry Como rode in Vic's elevator, so Vic stopped the car between floors and asked the great musician's advice. After hearing him sing, Como told Vic to keep singing and introduced him to a band leader. Damone's hero, Frank Sinatra, said that Vic had "the best pipes in the business".