The Pennsylvania Historical Commission, with the cooperation of the State Council of Defense, began broadcasting a series of dramatizations of important events from Pennsylvania history in the 1940s.

"Rifles in the Wilderness" 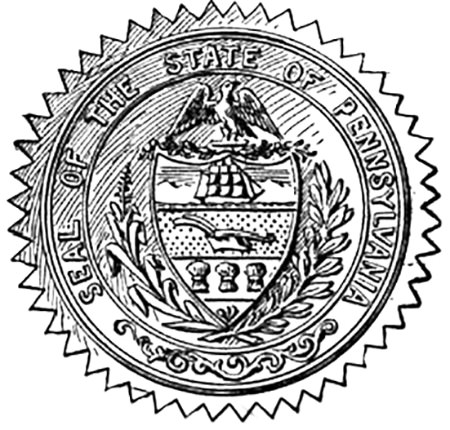 The most centrally located of the original Thirteen Colonies, Pennsylvania has always been considered the Keystone State. Just like the stones in an arch, the other states in the early American democracy drew power and greatness from the strong state in the center. With its steel mills, petroleum, and manufacturing, Pennsylvania is part of the industrial heart of America, but the state also has a strong agricultural core. It maintains the traditional values of the "Pennsylvania Dutch", Amish, and Mennonite cultures while embracing the diversity fostered by founder William Penn's strong stance on Freedom of Religion.

The birth and defense of the American Democracy have always been a part of Pennsylvania's fiber. The Continental Congress met in Philadelphia to draft the Declaration of Independence. The winter that General George Washington spent with the Continental Army at Valley Forge was one of the most critical periods of the Revolutionary War. Recruiting for the United States Marine Corps began at Tun Tavern in Philadelphia as early as 1775.

Soon after America entered the Second World War, the Pennsylvania Historical Commission, with the cooperation of the State Council of Defense, began broadcasting a series of dramatizations of important events from Pennsylvania history. Headlined Pennsylvania – Keystone of Democracy, the series of twenty-six broadcasts were prerecorded in the manner of a commercially syndicated broadcast. They were broadcast weekly over several different Pennsylvania stations, generally on weeknights, with the notable exceptions of Philadelphia stations WIP, WIL, and WHAT, which played the shows on weekends.

The producers felt that the broadcasts were "the opening gun in a drive to arouse Pennsylvanians to a sense of the important part which their State has taken in making the American democratic way of life a reality". Emphasis was "placed upon the fact that Pennsylvania has been and still is the 'keystone of democracy.'"