Choose your CD format
or order disks individually: Add to Cart Add to wishlist
Play a sample episode from February 16, 1934:

"Youre Gonna Lose Your Gal" 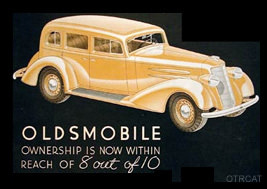 There's an easy chair by the fire with the radio tuned to the Oldsmobile Radio Show. Not only will we learn of the values of the New 1934 Oldsmobile, but we will be treated to "America's Favorite Singing Star," and Johnny Green and his Orchestra.

Our announcer is pioneer Sportscaster, Ted Husing, whose college football commentary for CBS would lay down the format of football broadcasts that are still familiar today. 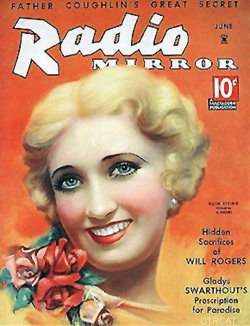 "America's Sweetheart of Song," Ruth Etting gained renown for her beautiful voice, stunning beauty, and tragic life. She got her break when the tenor got sick at the Marigold Gardens Club in Chicago, and she was the only one who could sing low enough to cover. As the featured voclaist at the club in 1922, she came to the attention of gangster Moe "The Gimp" Snyder. They were married in 1922, and he managed her career for the next two decades.  In 1927 she signed an exclusive recording deal and would be dubbed "the Sweetheart of Columbia Records," she would have over 60 hit recordings. Her big break in Hollywood would be the 1933 hit, "Roman Scandals," with Lucille Ball. However it is in Hollywood that her loveless marriage came apart. She divorced "the Gimp" in 1937, and fell in love with her piano player, Myrl Alderman. In 1938, the gangster shot Alderman in a rage. "The Gimp" was convicted of attempted murder, and Ruth would eventually marry her true love, but her career neer recovered from the scandal.

This collection contains all four episodes of this rare 1930s musical series known to be in existence.