The British Broadcasting Company held its first news broadcast on November 14, 1922. The British Press used its influence on Parliament to restrict the radio from broadcasting the news before 7:00 pm and forcing the service to use copy from wire services. The wire services were closed on Easter, 1930, so the BBC announced that there was no news that day and broadcast piano music. By 1934, there was an independent News Service, and the broadcast time restriction was lifted during WWII because of the public's desire for immediate War News. 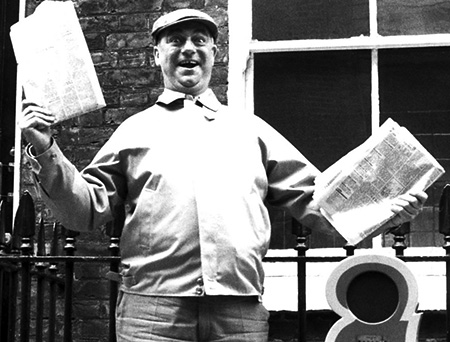 After the War, HAM listeners and other news enthusiasts on this side of the pond tuned into the BBC to hear a different perspective on international events. The hourly updates began with the tolling of Big Ben, and this was used as an accurate time check for navigation by yachtsmen and ships at sea. As interesting as the British perspective was, it always seemed rather foreign to American ears.

This cultural divide between the two great English-speaking nations was especially pronounced in matters of comedy. British humor can be both subtle and over the top, often both in the same routine. This is typified by Radio 2's comedy sketch program The News Huddlines hosted by music hall comic Roy Hudd.

Huddlines began in 1975. The sketches usually ended with a bombastic conclusion or a groan-worthy pun. The show had great fun spoofing the Royal Family, the Queen Mother played with a broad cockney accent was a regular feature.