That little Davey Sarnoff was going to amount to great things should have surprised no one who knew him growing up on the mean streets of the Lower East Side. Within days of getting off the boat from his native Minsk in 1900, nine-year-old Sarnoff was hawking Yiddish newspapers to help provide for his family. Less than four years later the young entrepreneur had saved two hundred dollars to buy his own newsstand. The profits from this enterprise only whetted Sarnoff's capitalistic impulse.

Seeking to advance in the newspaper industry, Sarnoff sought full-time employment with The Herald but wound up in the offices of the Commercial Cable Company, who hired him as an office boy. When the company refused to give him time off for Rosh Hashanah, Davey took his services to the American Marconi Company where he began to discover the wonders of Wireless communications. 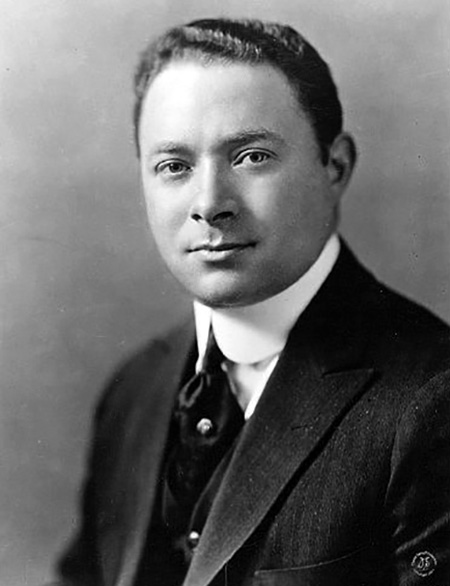 Sarnoff's enthusiasm for the technology helped him rise from office boy in 1906 to become the company's commercial manager in thirteen years. Along the way, he picked the brains of the technicians and operators at Marconi until he was well versed in the technical and commercial aspects of the wireless industry. According to the Sarnoff legend, he was on duty at the radio-telegraph station atop the Wanamaker Hardware Building on April 14, 1912, when the dots-and-dashes began to bring news of the RMS Titanic's tragic encounter with an iceberg in the North Atlantic. Supposedly, Sarnoff manned the telegraph key for 72 hours, bringing the first news of survivors to their families ashore.

As he rose through American Marconi, Sarnoff was on hand as the company demonstrated ever greater innovations of wireless services, including use on a railroad line and the use of a hydrogen arc transmitter to send music over the air. Most wireless users of the period assumed that the business would continue to serve individual "point to point" operators but Sarnoff had a vision of a single transmitter sending a signal to several receivers in a "broadcast" which would include information and entertainment. Around 1915 to 1916, Sarnoff began lobbying his bosses at American Marconi to develop a "radio music box" for "amateur radio enthusiasts". However, with the market about to explode in service of the Great War raging in Europe, they could not be bothered.

The US Military took charge of the American Radio industry for the duration but when hostilities ended the Navy took the lead in divesting the Government's radio interests to American companies (American Marconi had been a subsidiary of British Marconi). General Electric took the lead in forming the Radio Corporation of America (RCA). Under the reorganization, Sarnoff was made RCA's general manager and took another shot at keeping his Radio Music Box vision alive. His bosses at RCA and GE ignored him until he arranged to broadcast the Heavyweight fight between Jack Dempsey and Georges Carpentier in the summer of 1921. The match was heard by nearly 300,000 listeners, proving that the "amateur" radio market had potential.

The secret to RCA's continuing success, beyond its hard-driving GM, was its monopolistic hold on radio patents, a situation that was increasingly seen as distasteful to the American public. Rather than fight public sentiment, Sarnoff persuaded the RCA brass to set up a licensing agreement that allowed other manufacturers to use the patents in exchange for a small percentage of the retail profits. RCA stock prices soared.

With RCA and its licensees expanding Radio receiver manufacturing, consumers needed a reason to buy them. RCA purchased New York station WEAF in 1926 from AT&T, making it a sister station to RCA-operated WJZ Newark. Sarnoff managed to get AT&T to allow RCA stations access to high-quality telephone lines to create a network, and in late 1926 the formation of the National Broadcasting Company was announced.

More stations were quickly added to the network, which officially began broadcasting on November 15, 1926. The increase of affiliate stations led to a decision, announced on January 1, 1927, to split NBC into a Red and Blue network. The names were based on the colors of pushpins and yarn used on a headquarters wall map. NBC Gold and Orange Networks on the West Coast soon became a reality, along with a White Network of shortwave stations.

Sarnoff's behind-the-scenes machinations at RCA and NBC would become legendary in the face of anti-trust legal wrangling and dealing with competitors over the coming decades. As NBC rose from a scrappy new concept to the Nation's primary network for news and entertainment, the mid-November anniversary date would be remembered and treasured. Not every Anniversary was formally celebrated, but significant milestones like the Tenth, Fifteenth, Twentieth, and Fiftieth Broadcast Anniversaries called for Network Parties with All-Star performances from the Biggest Names in Broadcasting.