The Man on the Farm

A vehicle to sell chicken feed, The Man on the Farm is wholesome barnyard quiz show fun!

Choose your CD format
or order disks individually: Add to Cart Add to wishlist
Play a sample episode from June 20, 1947:

The Quaker Oats Company began as a conglomeration of grain mills from both sides of the US-Canadian border in Ontario and Ohio. In 1877, the company acquired the Quaker Mill in Ravenna, Ohio, and chose to keep the mill's name for the company after one of the founders "found an encyclopedia article on Quakers and decided that the qualities described — integrity, honesty, purity — provided an appropriate identity for the company's oat product." 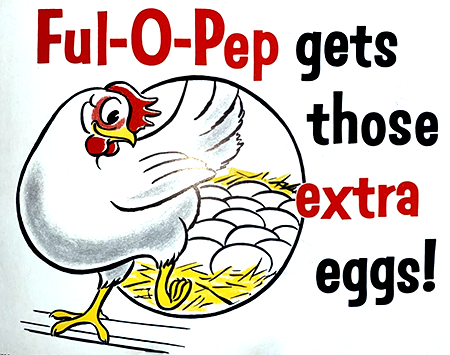 Today, the company is best known for producing hot and cold breakfast cereals, although they have interests in several snack and drink lines (Quaker Oats became a part of Pepsico in 2001, the beverage giant was primarily interested in obtaining the Gatorade brand). The familiar round package began appearing in kitchen cupboards in 1915 and became an indispensable convenience food during the 1920s with the introduction of Quaker Quick Oats (the packaging tube was often used to make a component of home-made radio receivers). During the War, a subsidiary, the Q.O. Ordnance Company produced artillery shells at the Cornhusker Ordnance Plant in Grand Island, Nebraska.

An important part of the milling business is producing livestock feed, and Quaker's feed brand was Ful-O-Pep. Livestock research was conducted at the Ful-O-Pep Research Farm in Libertyville, Illinois. Agricultural scientists working at the research Farm studied and developed dietary schemes and feeding methods which allowed farmers to get the highest yield and healthiest specimens in poultry flocks, dairy and beef herds, and pigs. The next challenge was to get the knowledge developed at the Farm out to farmers.

Normally, feed store operators who carried the Ful-O-Pep line would happily dispense the information to their customers, the trick was to get the farmers to shop at the right feed store. The answer, as it was for so many things, was radio.

WLS Chicago began broadcasting as a service to farmers under the ownership of Sears, Roebuck, and Company ("World's Largest Store") in 1924. Having sold plenty of radio sets to those farmers, the station was sold to The Prairie Farmer magazine in 1928. In addition to several daily farm reports, WLS was the home of the National Barn Dance on Saturday afternoons. 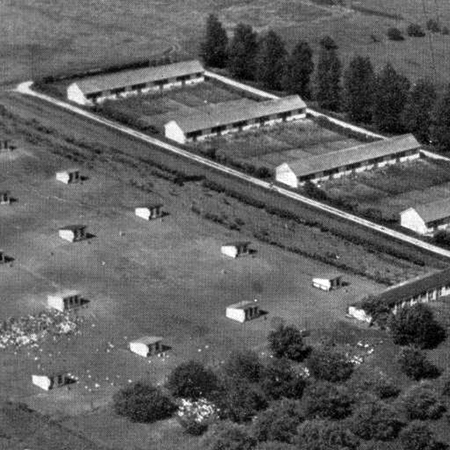 Quaker Oats and Ful-O-Pep began sponsoring the Man on the Farm program around 1940. Originally, the program was scheduled on a "spot" basis but in 1949 Billboard reported that rising prices made it more economical for the sponsor to buy a season's worth of time at noon on Saturdays. The show was hosted by Oklahoma native and WLS personality Chuck Acree.

"If I'm going to emcee a farm program," Acree told the Mutual Network magazine Mirror in 1952, "I'd better know something about farming." So, he bought a small farm near the Ful-O-Pep Research Farm in Libertyville. The program had a fun quiz show format featuring questions sent in by listeners. The prize for a selected question was a 100 lb sack of Ful-O-Pep Chick Starter Feed, so submissions had to include the name and address of the submitter's local Ful-O-Pep dealer to claim their prize.

The show was broadcast from a studio built in a converted chicken coop at the Ful-O-Pep Farm. During the middle segment of the show, Acree would interview Dr. O.B. Kent on the latest animal husbandry news. Otherwise, the show maintained a fun and party-like atmosphere.

On one episode in this collection, a question comes up about kissing a man with a mustache and proves that farmer's wives can be every bit as randy as a Hollywood Starlet!