Lucky Strike and other cigarette brands were sponsors of many of Old Time Radio's greatest offerings. 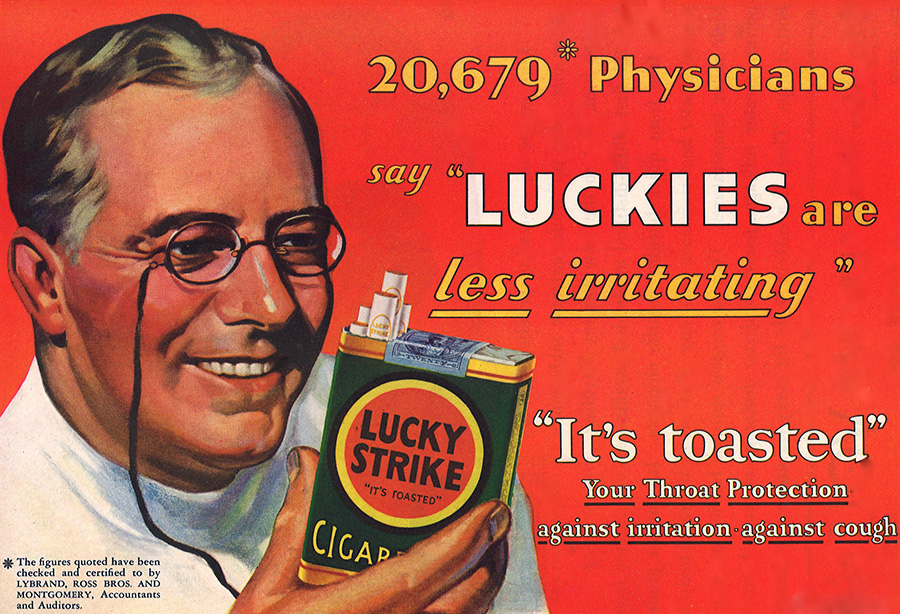 One of the biggest things that a modern viewer will notice in an old movie is how often someone is lighting up. Granted, this was an era when a pack-a-day habit marked you as a light smoker. Bogey would smoke a pack over the course of a seventy-minute film and pretty girls would swoon if Duke Wayne offered them a smoke. Modern films are not quite smoke-free, but cigarettes are a sign of a damaged character and someone will call them on it.

What cigarettes were our screen heroes smoking? Hollywood and the advertising agencies had yet to discover the wonders of "product placement", but it is a fair bet that when Bogey was lighting a stick to blow smoke in some dames' face, he was firing up a Lucky Strike. After all, Lucky Strikes was one of the best-selling brands of the 1930s and '40s. Whether Luckies were, in fact, a superior smoke is beyond the scope of this forum, however, the advertising for Lucky Strikes is a terrific lesson in marketing. 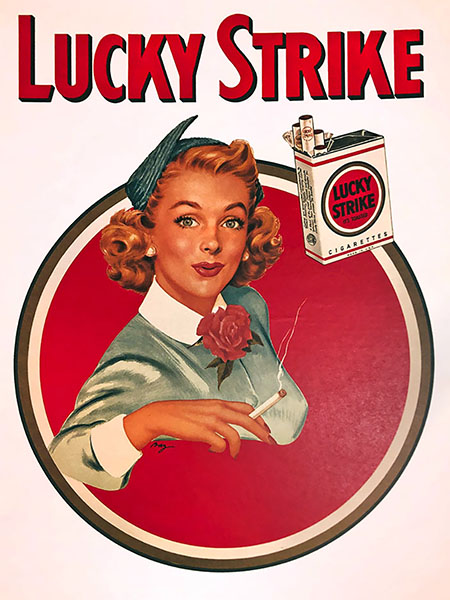 The R.A. Patterson Tobacco Company of Richmond, Virginia, introduced Lucky Strike Cut Plug Chewing Tobacco in 1871. The name was a comment on prospecting in one of the many gold rushes of the era; about four out of every 1,000 gold seekers would have a chance to strike it rich, but consumers of R.A. Patterson's tobacco would always enjoy a "lucky strike". There is an Urban Myth that Lucky Strikes got their name because approximately one out of every one hundred Lucky Strike sticks were laced with marijuana. This Urban Legend has no validity.

Around the turn of the century, the company decided that it could sell more tobacco by putting it in cigarettes. The R.A. Patterson Company was acquired by the American Tobacco Company (ATC) in 1905 and their marketing department came up with the "It's Toasted" slogan in 1917. Toasting (as opposed to sun-drying) supposedly improved the flavor of the tobacco. "It's Toasted" also helped when ATC began marketing Lucky Strikes to women during the 1920s as a means to maintain a thin, attractive figure with the "Reach for a Lucky instead of a sweet" campaign.

ATC and Lucky Strikes were early adopters of sponsorship of radio music programs. "B.A. Rolfe and his Lucky Strike Orchestra" recorded for Edison Records around 1928. The weekly popular music review, Your Hit Parade, began on broadcasts of The Lucky Strike Dance Hour in 1928 on the Red Network. The show debuted with its weekly 15-song format and Your Hit Parade title on April 20, 1935. In 1937, the retitled Your Lucky Strike Hit Parade added the talents of tobacco auctioneer Lee Aubrey "Speed" Riggs.

One of Lucky Strike's most notorious marketing efforts centered on the package coloring. In the mid-Thirties, women supposedly began to avoid buying Lucky Strikes because the green and red cigarette packages clashed with their clothes. ATC secretly sponsored a series of high-brow charity events, including a "Green Ball" at the Waldorf Astoria Hotel in New York City, designed to make the green of the cigarette package fashionable. The package famously changed from dark green to white in 1942 with the advertising claim "Lucky Strikes Go to War!", preserving the copper needed for the green dye for the War Effort. The actual amount of copper used was negligible, the white packages were more appealing to women smokers and the War provided a patriotic excuse for the change.

This collection of Lucky Strike Presents spots are short, syndicated "filler" spots, mostly around five minutes in length. They were recorded between 1938 and 1940, featuring songs by Ginny Simms, Kay Kyser, Orrin Tucker and his Orchestra, Wee Bonnie Baker, and many other popular acts. "Speed" Riggs appears in many episodes explaining the nearly unintelligible Tobacco Auctioneer's chant.