One of the greatest players of his day, perhaps of all time, Lou Gehrig's story is one of joy and incredible tragedy.

Baseball movies are almost never made for baseball fans. They are a way for people who might not appreciate the game for its own merit to experience the magic that occurs on a field of vivid green under an achingly blue summer sky. Fans already understand that there is magic beyond the simple formula of "throw the ball, hit the ball, catch the ball", magic that elevates baseball beyond a mere game.

One of the greatest baseball movies of all time is MGM's the Pride of the Yankees (1942, directed by Sam Wood), and it brings the magic of baseball to a higher level. A likable and respectable young man comes 'out of nowhere' to become one of the greatest players in the game and has a beautiful love story, but tragedy rears its ugly head in the final act. The film was one of Gary Cooper's greatest performances and gained ten Oscar nominations, including Best Actor and Actress, Best Writing, and Best Picture. Pride is all the more poignant because it is based on a true story. 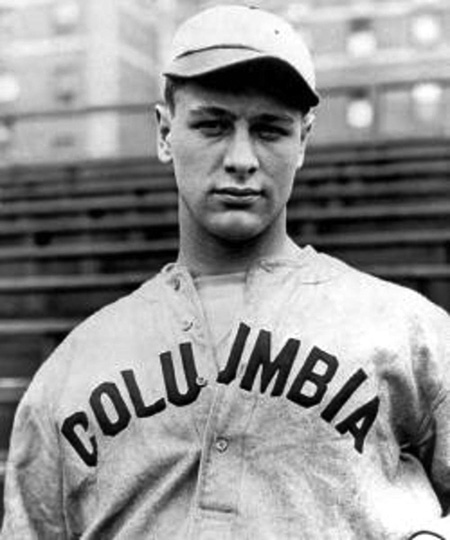 Heinrich Ludwig Gehrig was born to German first-generation immigrant parents on Manhattan's Upper East Side. The boy's name was soon Americanized to Henry Louis, but everyone knew him as Lou Gehrig. Papa Gehrig was a frequently-out-of-work sheet metal worker, leaving Mama as the family's primary breadwinner. Lou had an older and younger sister, both of whom died at an early age, and a brother who died in infancy.

Mama hopes her surviving little boy (who weighed 14 pounds at birth) would grow up to be a businessman. When Lou was five, the family moved to an apartment in Washington Heights within blocks of Hilltop Park, home of the American League New York Highlanders (later renamed the Yankees). The new flat was also in easy walking distance of the Polo Grounds, home of the National League Giants. Like every other boy in the neighborhood, Lou loved baseball and whenever he could save two bits, he would spend the afternoon in the leftfield bleachers of the Polo Grounds. He kept his mother's wishes alive by getting good grades in school, but he also became one of the best sandlot ballplayers in the City.

Lou's squad from Manhattan's Commerce High School was invited to play Chicago's best high school team at Cubs Park (two years before it became Wrigley Field). At the top of the ninth, the Commerce High Nine were up 8-6 with the bases loaded when Lou stepped up to the plate. Any hit would have clinched the game, but Gehrig managed to knock the first pitch out of the park.

After high school, Lou won a football scholarship to Columbia University (where Mama was working as a maid in the Sigma Nu Theta frat house). His grand slam in Chicago got him invited to try out for the Giants. Although he knocked six consecutive dingers during batting practice, when he took the field, he allowed a ground ball to roll between his legs and was encouraged to leave the park.

The scout who brought Gehrig to the Giants helped the youngster to land a contract with the class A Hartford Senators. College ball was not very organized at this point, and Lou knew his family needed the money. He may not have realized that being paid to play for the Senators, or any other team, would jeopardize his scholarship eligibility. Columbia's baseball coach convinced the other coaches at his rival schools that Gehrig had made an "innocent mistake" and Lou kept his eligibility although he was forced to Redshirt his freshman year.

During his sophomore year, Gehrig lit up the College Baseball world with a .444 batting average and knocking seven homers over 19 games. He also pitched for Columbia that year, earning a 6-4 record and striking out 17 hitters in a single game. By the end of the short 1923 college season, scouts for the New York Yankees came calling.

Yankee's manager Miller Huggins recognized Gehrig's raw talent but sent him back to Hartford for seasoning. Lou joined the Yanks for a full season in 1925, although he mostly rode the pine because the squad had a reliable first baseman, Wally Pipp, who had just had one of the best seasons of his career.

There are conflicting stories as to why Manager Huggins put Lou into Pipp's spot on June 2, 1925. One story holds that he showed up at the clubhouse hungover, Pipp himself claimed to have been beaned in the head during batting practice. Whatever caused Huggins' decision, Gehrig went 3-for-5 at-bats and hit a double. Huggins had a new first baseman. His faith in the youngster paid off, although he needed to help him get past some nerves. After all, Lou was being tossed into a line up featuring the likes of Babe Ruth and Bob Meusel. Huggins advised him, "Now don’t get rattled. If you muff a few, nobody’s going to shoot you."

Naturally, a slugging rivalry developed between Gehrig and Ruth as the two competed for the American League Home Run title over the next several seasons. It says a lot about the men and their times that rather than degenerating into a "trash-talking match", the two sluggers developed a respectful and even friendly relationship. Lou took the Babe fishing and Ruth tried (unsuccessfully) to introduce Gehrig to the world of bars and nightlife. Mama Gehrig invited Ruth to several home-cooked meals and the Babe presented Mrs. Gehrig with a Chihuahua pup in appreciation.

The relationship was also fruitful financially. Babe's publicist organized a nationwide "barnstorming tour" after the season; each of the Big Leaguers would captain squads of local all-stars from towns across the West. 250,000 fans got to see their heroes play and Lou's take from the tour was $10,000, more than his contract from the Yankee's paid him (Ruth pocketed $30,000). The older play also advised Lou to negotiate for more money from the Yankees, "No matter what offer he puts on the table, insist on $10,000 more". Gehrig began the 1928 season with a contract for $25,000 for three years. 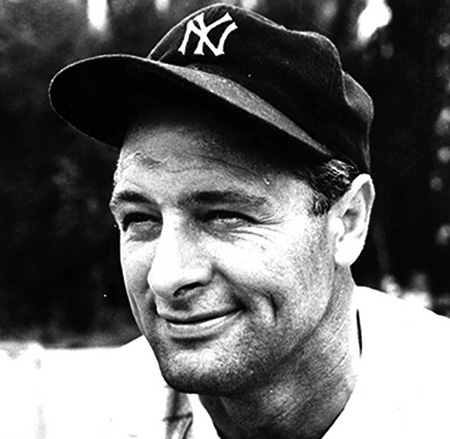 The Yankees swept the World Series against the Cubs in 1932, but more importantly, Lou met a secretary form the Windy City named Eleanor Grace Twitchell. Lou and Eleanor had completely opposite personalities. She was the pampered daughter of a Chicago hustler who supplemented her allowance by winning at the horse track; "I was young and rather innocent, but I smoked, played poker, drank bathtub gin along with everybody else". They met at a party when the Yankees came to town to play the White Sox. The Yankees' had a strict curfew and Lou was always one to follow the rules, so he offered to walk Eleanor home. When they arrived at her apartment, he abruptly said good night and disappeared into the night.

She quickly realized that this was "a shy man's version of the rush". The relationship was maintained through letters while Lou was on the road and they became engaged after Spring Training in 1933. Winning Mama Gehrig's approval was another matter. The date was set for Friday, September 29, after the second-to-last game of the season. Eleanor was busy in what was to be their new apartment the day before the blessed event when Lou came in after a row with his mother about his girl. In frustration, he got the mayor of New Rochelle on the phone. His Honor came to the dusty and construction-torn apartment to declare them man and wife then and there.

The next afternoon, Lou was 0-4 at the plate, and his mother and most of his teammates did not show up for the reception after the game. During the 1934 season, however, he achieved baseball's "Triple Crown", batting .363, knocking 49 homers, and 165 RBIs.

Early in the 1933 season, a reporter pointed out that Gehrig had played in 1,250 consecutive games, just 56 outings short of the record set by "Deacon" Scott in 1925. In July, Lou played in the Major League's first All-Star game, and on August 17 he played his 1,308th consecutive game, clinching the record.

Babe Ruth left the team after the 1934 season, leaving Gehrig as one of the only standout players in Yankee pinstripes. Eleanor encouraged him to accept the Team Captain position, but without the support of a strong lineup, his stats suffered because pitchers could now afford to work around him. In 1936, the Yankees brought in a colorful rookie from the Pacific Coast League named Joe DiMaggio to bat ahead of Gehrig. Lou was still the better player, but in the eyes of the press, he was upstaged by the rookie.

Gehrig showed up for Spring Training in 1938 in less than tip-top shape, although he redoubled his efforts in conditioning to drop the extra pounds. He had already agreed with Eleanor to hang up his spikes on June 29, 1939, his 36th birthday, but even as he approached his 2,000th consecutive start she began to notice "little things" which indicated that Lou's strength and coordination were beginning to fail.

As the summer progressed, Lou began to leave games early due to injury. Even more telling, the home run king was now knocking more singles and doubles, and even they became elusive. That winter, he maintained his training, but Spring Camp was a disaster. When the regular season began there was little improvement, he was hitless in five of the first eight games. On May 2, the Iron Horse's 2,130 game streak came to an end.

Eleanor contacted the Mayo Clinic in Minnesota and was advised to get Lou there as soon as possible. On June 19, the day he had promised his wife he would retire, Lou Gehrig's doctors confirmed their diagnoses, amyotrophic lateral sclerosis (ALS). As soon as the Yankees announced Gehrig's retirement the team began to plan a way to honor him. It was decided that July 4, 1939, would be "Lou Gehrig Appreciation Day" and have the most "colorful and dramatic a pageant as ever was enacted on a baseball field". Gehrig's jersey, number 4, was retired, the first time such an honor had been bestowed on a baseball player. Gehrig also made the speech that would become known as "Baseball's Gettysburg Address":

"Fans, for the past two weeks you have been reading about a bad break. Today, I consider myself the luckiest man on the face of the earth."