Lighthouse keepers faced the dangers of storm-lashed locations and the loneliness of near-total isolation.

Choose your CD format
or order disks individually: Add to Cart Add to wishlist
Play a sample episode from November 14, 1949: 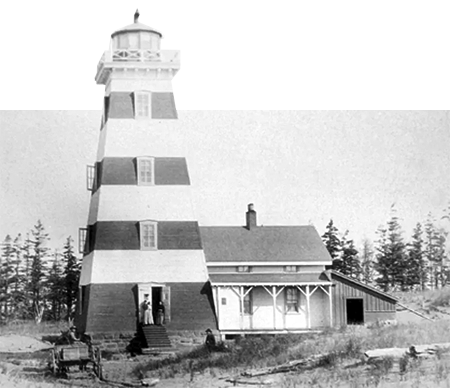 Where the mighty sea and the land come together are some of the most beautiful on the planet, but experienced mariners know that they can also be the deadliest. A well-constructed ship in the middle of the sea is in relatively little danger. Most ships are built more than strong enough to resist the mightiest storm, and in the middle of the ocean, things to collide into are few and far between. Near land, a ship is vulnerable to the concept of an unstoppable force: the rocks of the land.

Ships have to come to the land at the end of their journeys, and prudent mariners do all they can to see that their arrival coincides with the visibility of daylight. Even in the age of GPS, navigation is not always precise enough to guarantee a daylight approach to a harbor, and for centuries mariners have come to depend on lights placed along the shoreline to guide them in the darkness.

When communities first began to depend on sea-trade for their economic well being, citizens were enlisted to maintain fires on hilltops to guide ships into the harbor. With the realization that the higher the fire was, the further it could be seen, towers were built which would evolve into the first lighthouses. In time, charts would be drawn, copied, and shared with sea captains that showed not only the location of the various lights but the positions of nearby navigational hazards as well.

As technology increased so did the ships at sea. Open fires were eventually replaced by oil-fired lamps. The flame of the lamp would burn more steadily and brighter if surrounded by a glass chimney, and French engineer Augustin-Jean Fresnel eventually developed a "stepped-glass" lens which allowed the beam to be seen even further out to sea. 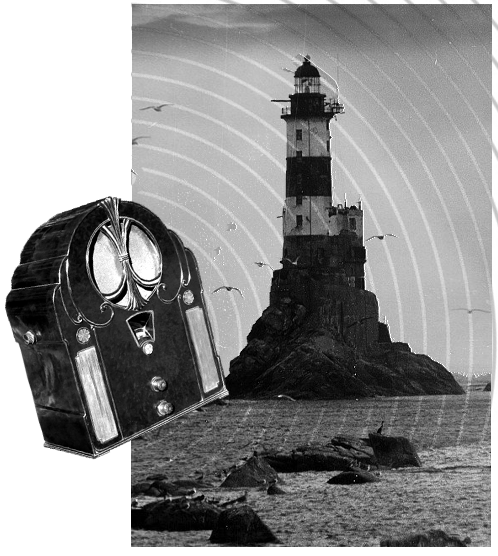 To increase their visibility, lighthouses are usually located on off-shore islands or isolated headlands. This meant that the lighthouse keepers had to deal with isolation as well as the stormy nature of their posts. Their primary mission was to keep their light burning through the long, lonely nights, but they also had to maintain the light as well as stock supplies to maintain their health and comfort. Often, the lighthouse and the dwelling attached to it became very attractive seaside homes. Today, most lighthouses are fully automated, making the lighthouse keeper an expensive redundancy. Many scenically located lighthouses are popular tourist destinations and the keeper's homes have become very exclusive bed-and-breakfast type facilities.

Hallmark Playhouse, September 23, 1948, "Captain January". Lionel Barrymore plays a gruff old seadog who is tending a lighthouse on an island along a rugged coast. During a nasty storm some years back, he rescued a baby from a shipwreck. Captain January is determined to raise the girl on his island, despite the objections of some local "busy-bodies". This story is adapted for several shows in this collection.

Boston Blackie, September 10, 1947, "The Ghost Lighthouse". The approach to the town harbor is protected by the Rocky Island Lighthouse. If they sail south of the Light, they are sure to hit Devil's Reef. Recently, four ships from the same shipping company, each with experienced captains, have wrecked on the reef. Each of the Captains insist they were north of the light, and Blackie thinks they were north of "a" light, if not "the light".

Escape, March 17, 1950, "Three Skeleton Key". Three rough characters tend a lighthouse off the steaming jungle coast of French Guiana. One night, they spy a deserted sailing ship headed directly for their tiny island. When day breaks, they see why the ship has been abandoned; the decks and rigging are filled with thousands, perhaps millions of hungry rats! When the ship finally wrecks on the reef, the rats have nowhere to go, except into the lighthouse tower.