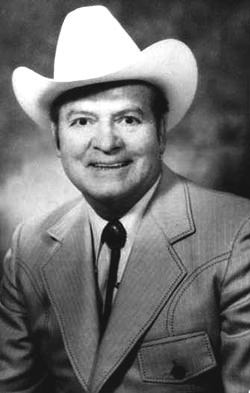 Johnnie Lee Wills was an American violinist popular in the period 1930-1950. He was part of musical group "Texas Playboys" of Bob Wills, his elder brother. He also starred in 1940 film "Take Me Back To Oklahoma"

Johnnie Lee Wills was delivering flour and cotton in Texas and decided that he's rather be doing just about any other job in the world.  He picked up the banjo and toured with his brother's band the "Texas Playboys."  The band got their start on radio station KVOO in Tulsa on a trial broadcast at midnight—the response was overwhelmingly positive.  They remained with the station for 8 years as "Bob Wills and the Texas Playboys."

When brother Bob moved to Hollywood in search of fame and fortune, Johnnie Lee Wills took over the radio show and renamed it "Johnnie Lee Wills and his Boys."  The old time radio music show features "Western Swing Music" that is smooth and sweet.  The show was sponsored by General Mills' Red Star Flour. 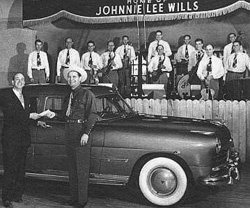 Starting out on a Tulsa radio station with a midnight program, Johnnie Lee Wills and his band quickly gained favor with the public and moved to a noon slot from Monday through Saturday. Remaining with this same station for 25 years straight, Johnnie's program was, at the time, the longest running live old time radio show to date. After changing his band name from "Bob Wills and the Texas Playboys" to "Johnnie Lee Wills and All the Boys," Johnnie and his boys continued to play on the western circuit for many successful years. So join Johnnie Lee and his square-shootin musicians for their musical program full of your favorite western tunes, old time hoedown numbers, and sentimental ballads. It's more fun than a rodeo!