You Crazy, Youuuuuu! Joe Besser developed his own comic persona that was as silly as it was loveable. Best known for his two-reel short features and becoming one of the Three Stooges, Joe was also a favorite of Old Time Radio!

Choose your CD format
or order disks individually: Add to Cart Add to wishlist
Play a sample episode from January 25, 1948:

"On the Train to Hollywood" 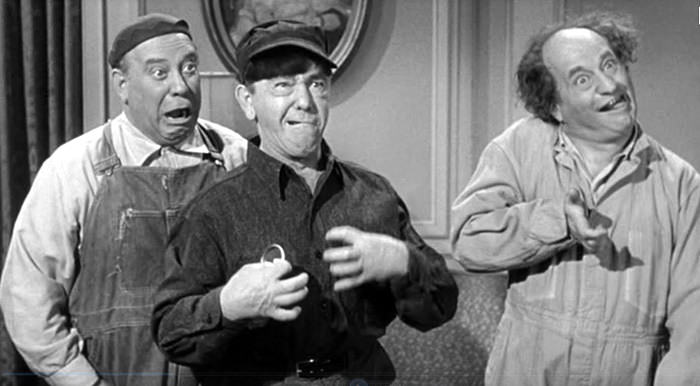 An enterprising kid, Joe was working as a Western Union delivery boy, distributing handbills for the Fox Theater, and plugging songs for a sheet music store. When ever he could get away with it, he would sneak away from school to catch a matinee at the local vaudeville house. The highlight of Joe's childhood years came when the Great Howard Thurston's traveling magic show made its annual stop in St Louis. 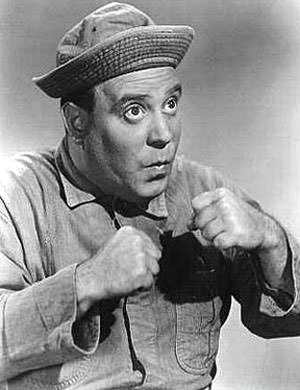 From the first time young Joe saw the spectacle he began sneaking backstage to talk with the magician and beg to become part of the act. Every time the great magician would put Joe off, promising "when you get a little bit older, will discuss it." It must have been frustrating for a thirteen year old boy to have his dreams dismissed for five years in a row, and in 1920, Joe sat and watched as the workers loaded the props and scenery onto a waiting freight train.

The next morning, when the train reached Detroit, Thurston found Joe sleeping on top of the lion's cage. The magician first wired the Besser family in St. Louis, then agreed to let the youngster become part of the act. Joe's first onstage assignment was to assist in the pull the rabbit from the hat trick. This trick involves two rabbits; while one is displayed, the second is hidden in the magician's cape. Joe was so nervous at his first appearance that he pulled the second rabbit out while the first was still on display. The audience roared with laughter, Thurston reassigned Joe to "comic mishap" roles, and Joe began to discover that he had a more promising future in comedy rather than sleight of hand.

Joe developed a distinct comic character that was whiny, bratty, easily excitable, and prone to outbursts. His cries of "You crazy, Youuuuuuu!", "Not So Harrrrrrd!" or "Not so Fassssssst!" were incredibly silly and a sure fire hit with audiences. This was a superb fit for the rapid fire vaudeville team of Olsen and Johnson, but the Shubert Brothers hired Joe away,signing him to a theatrical contract. Joe appeared in a few Shubert reviews, including the Passing Show of 1932. In short order, Columbia Pictures out bid the Shuberts, and Joe began making two-reel comic shorts. Along the way, he found time to make a few appearances on Red Skelton's first radio show, Avalon Time. Joe also had several memorable appearances on The Jack Benny Program, notably when Jack took the company to the East Coast to appear on military posts in 1943.

Several radio comedy hosts were begging for Joe to make a guest appearance on their shows. Joe was a terrific foil for Milton Berle on Uncle Miltie's Let Yourself Go, and when Berle appeared as a featured guest on Philco's Radio Hall of Fame, one of his bits was trying to teach Joe Besser how to get girls. Besser's comic persona became well enough established that it became a favorite parody for the Looney Tunes characters.

Joe Besser occasionally substituted for Bud Abbott on the Abbott and Costello radio show, and when the team made the move to the small screen, they cast Joe as an oversized bratty kid named Stinky.

When Shemp Howard passed away in 1955, brother Moe Howard's first thought was that he and Larry Fine would continue as the Two Stooges, but studio executives nixed the idea. They insisted that Joe Besser, who was already under studio contract, become part the new third Stooge. Besser was hesitant to take the physical abuse that is a Stooge's lot ("Not So Harrrrrd!"), but managed to word extraordinarily well with Larry and Moe.

Joe Besser was the only Stooge present when the Star commemorating the Three Stooges was placed on the Hollywood Walk of Fame at 1560 Vine Street.