By popular demand, this compilation contains the guest appearances of the the Beautiful Ms. Jane Russell--one of Hollywood's leading sex-symbols and a favored Pin-up girl.

Choose your CD format
or order disks individually: Add to Cart Add to wishlist
Play a sample episode from June 17, 1952: 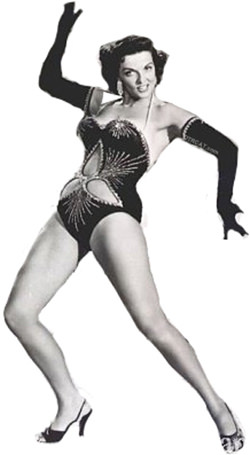 The Beautiful Ms. Jane Russell was one of Hollywood's leading sex-symbols and a favored Pin-up girl. Unlike some of her contemporaries, Jane Russell managed to keep scandal out of her personal life. The same can't be said of the relationship some of her pictures had with the censors!

Russell was born in Bemidji, Minn, in 1921. The family later moved to Southern California, where her father was an office manager for a soap making plant. She took piano lessons and became interested in acting while at Van Nuys High School. She worked as a receptionist after graduation, and did some photographic modeling.

In 1940 Jane signed a seven year movie contract with Howard Hughes. The eccentric millionaire wanted to make the most of his new discovery, and set his publicity machine to work, releasing numerous photos the showcase Russell's voluptuous figure and making her cleavage prominent. Hughes even had his engineers design an underwire brassiere for her that would support (and display) her 38D bosom. (Russell later revealed that she never wore the bra during filming, instead using her own. Although Hughes was directing, he never knew the difference.) The Outlaw would be Hughes' "epic story of cleavage in the Old West." After it was completed in 1941 the film ran afoul of the MPAA censors. There was no specific rule about "cleavage and jiggling," but it was still a little too much for the censors. 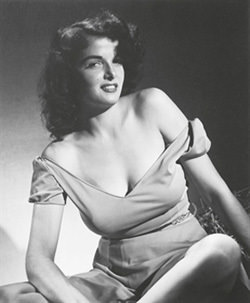 Russell's popularity as a Pin-up Girl led to many requests for her to appear on Command Performance, as well as Jubilee. Many of these AFRS and USO efforts involved working with Bob Hope, how jokingly introduced her once as "The Two and Only Jane Russell." Hope and Russell worked together in the film The Paleface (1948). The picture was featured on the Mar 3, 1950, broadcast of Screen Director's Playhouse, with Hope and Russell reprising their roles.

Jane made several appearances on Bob Hope Show. In the Mar 4, 1953, show, Bob tries to convince Jane to make a 3D movie with him.

In 1954's RKO musical, The French Line, Russell's work would have trouble with the MPAA again. It featured a racy Hootchy-Kootchy number, "Lookin' for Trouble" with Jane wearing very little for the 1950's, a bubble bath scene, and "vulgar" humor. 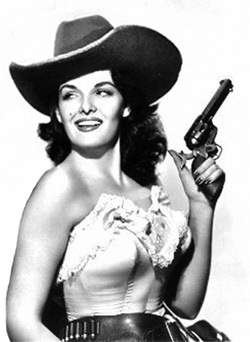 And it was filmed in 3D, causing audiences to jump back whenever Russell turned towards the camera. Theater owners cut as much as 12 minutes of footage away, leaving audiences to wonder what was so scandalous. The picture did poorly at the box office.

Along with her first husband, Jane Russell adopted a daughter and two sons, but was frustrated with delays in the paperwork. She would found the World Adoption International Federation which has helped to facilitate more than 50,000 adoptions.

After the death of her third husband in 1999, Ms Russell became lonely and missed the limelight. Along with some non-show biz friends she put together a small music act that performed occasionally at a Mexican Restaurant near her home in Santa Maria, CA. The act grew too big, and had to move to an airport hotel, where Jane performed twice monthly until just before her death in the end of Feb, 2011.

Jane Russell is honored with a star on the Hollywood Walk of Fame at 6850 Hollywood Blvd.