"Hardy Family 447a Becomes A Bachelor" 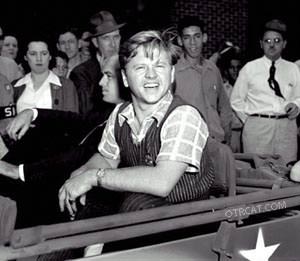 Mickey Rooney originally was denied admittance
to the military, but later was sent as an entertainer.
Above: Mickey Rooney during his WWII tour where
he performed in before more than 2 million G.I.'s

Originally making his stage debut as in infant in vaudeville, Mickey Rooney debuted on screen at six years old in the silent film, Not to Be Trusted (1926) as a cigar-smoking midget. His later role as 'Andy Hardy' led to seventeen feature films featuring that character - from 1938 through 1958.

In this chaotic situation comedy, The Hardy Family, Andy Hardy graduates from high school and becomes and business man.