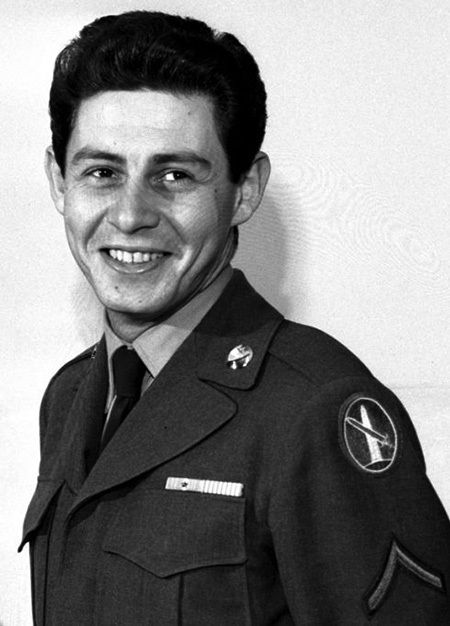 The modern American Military is recognized the world over as a professional fighting force manned by all-volunteer personnel since 1973. However between 1940 and 1973, during periods of peace and war, the manpower needs of the US Military were supplemented by conscripted troops drafted into service. Most draftees served their "hitch" honorably, and after performing the duties they were assigned left the service with the thanks of a grateful nation, but there can be no denying that being drafted would have interrupted a young man's plans for his personal and professional life. Partly for this reason, volunteers were generally preferred for service over draftees even during times of conscription. At times, the notion was put forward that choice assignments were likely to go to volunteer while more dangerous or dirty duties would be given to draftees.

Since the selective service drew randomly from the male population, a few celebrities and entertainers bound to be called up. Many of these draftees were given the option of joining Special Service branch and working to raise the morale of their fellow soldiers. Created on July 22, 1940, the Special Services were one of the few integrated units in the Army during the War.

Singer Eddie Fisher was a rising star in the ranks of crooning recording artists. In 1949, he was discovered on the "Borscht Belt" circuit helped his career by having him sing on his radio program. Fisher was an instant success and signed a contract with RCA Records. When his draft number was called in 1951, he was sent to Ft Hood in Texas for basic training before spending a year in Korea.

He would later say of his time in Korea: " The Army gave me a lot more than I gave it. Why I did shows I never would have done. In the rain, the mud, off the backs of trucks, without a mike and sometimes without even music."

After Korea, PFC Fisher was assigned to Fort Myer in the nation's capital and designated the official vocal soloist with the United States Army Band ("Pershing's Own"). In addition to his duties with the Army Band, Fisher was allowed to continue his recording career and makes guest TV appearances (billed as PFC Eddie Fisher). One of his military assignments was to record the Army Recruiting transcribed program Forward March.

Like recruiting shows for the other services, Forward March used popular music to gain listeners before delivering the main message. Since the draft was bringing plenty of young men into the service, many of the messages on Forward March were meant to attract lady volunteers for the WAAC corps.