Enola Gay and the Atomic Bombing of Hiroshima Recordings

This collection includes news stories and radio shows The US Air Force Bomber that dropped the first atomic bomb on Hiroshima. 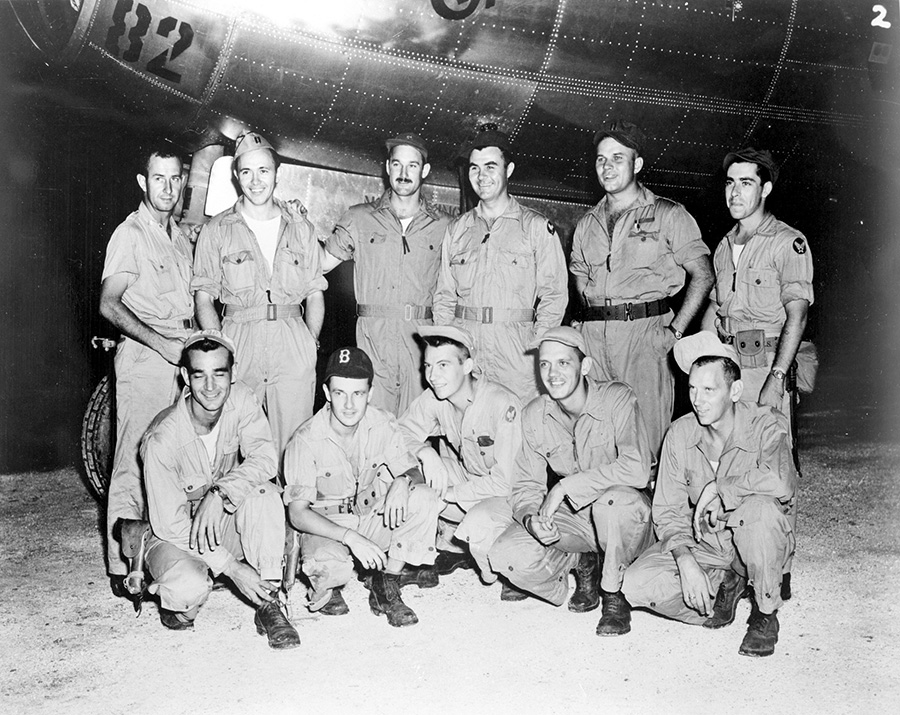 Ever since men have been able to devise vessels to carry them onto the ocean and out of sight of land, he had given a good deal of thought to naming his ships. Those who serve on ships can tell you that each vessel has its own moods and spirit, they consider ships to be living things. It has been said that building and launching a ship is as close as a man can ever come to knowing the sense of accomplishment a woman feels at giving birth, so it is little wonder that naming a ship is an important tradition. 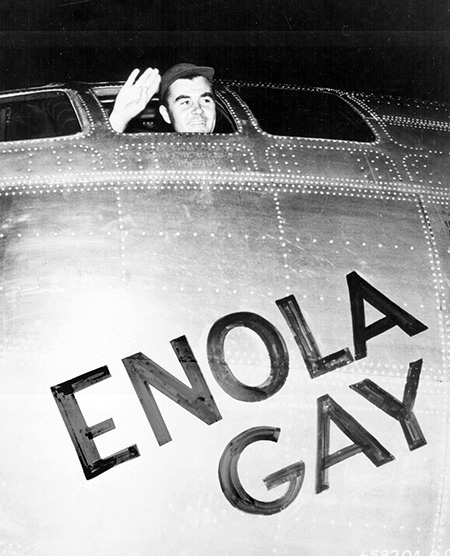 In the industrial age, automobiles and aircraft are often seen as tools for accomplishing a specific task, and therefore are usually not imbued with the spiritual presence which requires a name like a ship does. A warplane, however, will be carrying its pilot and crew into (and hopefully out of) incredibly hazardous conditions, so if there might be some spirits on the craft, it is wise to make peace with them.

Paul Tibbets Jr., of Columbus, Ohio, joined the Army Air Force in 1937 and qualified as a command pilot in 1938. In the early months of the War, he commanded a squadron of B-17 Flying Fortresses flying daylight bombing missions over Occupied Europe. Tibbets returned to the States in February 1943 to help Boeing with the development of the B-29 Superfortress, perhaps the most complex aircraft built to date.

Unknown to Tibbets, the Manhattan Project was developing a "gadget" which would have a major impact on the War, and this gadget was to be delivered from a B-29 belonging to the soon to be formed 509th Composite Group (composite because the Group would employ C-47 Skytrain and C-54 Skymaster transport aircraft along with B-29 bombers). LtCol Tibbets was assigned to command the 509th in September 1944 and he was able to select his personal aircraft while it was still on the assembly line at the Glenn L. Martin Aircraft factory in Omaha, Nebraska, a Model B-29-45-MO, Serial number 44-86292. He named his aircraft Enola Gay after his mother.

The bomber was delivered to the 509th's base at Wendover Field, Utah, on June 14, 1945. In less than two weeks, she was winging her way to Guam where some bomb-bay modifications were made before proceeding to Tinian Island on July 6. The "gadget" developed by the Manhattan Project was, of course, the atomic bomb. Enola Gay flew eight training missions in July, including dropping "pumpkin bombs" (bombs which were the same size, weight, and shape as the "Fat Man" implosion devices but loaded with conventional explosives) on industrial targets in Kobe and Nagoya. 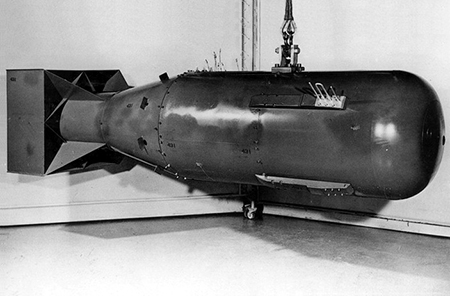 The "Little Boy" gun-type nuclear weapon was loaded into the bomb-bay and Enola Gay took off from Tinian in the early morning darkness of August 5 for the six-hour flight to the target. Over Iwo Jima, she rendezvoused with two other B-29s, the Great Artiste loaded with instrumentation and Necessary Evil carrying photographic equipment. Navy Captain William S. "Deak" Parsons was in overall charge of the mission and armed the "gadget" in flight to minimize danger to ground personnel. A half hour before reaching the target, the safety devices were removed from the device and at 8:15 local time "Little Boy" was released from Enola Gay from an altitude of 31,060 feet. It took 43 seconds for the device to drop to its detonation point 1,968 feet above the city of Hiroshima, Japan. By the time the shockwaves from the detonation reached the aircraft it had traveled eleven and a half miles. Although there was major buffeting, the aircraft on the mission suffered no damage. 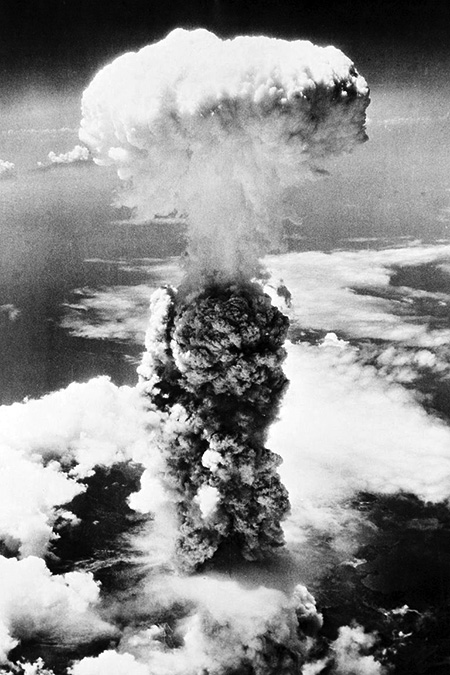 Enola Gay touched down on Tinian at 2:58 after the twelve-hour and thirteen-minute mission. LtCol Tibbets was the first to disembark the aircraft and he was awarded the Distinguished Service Cross on the spot. On August 9, Enola Gay, piloted by Capt. George Marquart was the weather observation aircraft over Kokura, Japan, the primary target for B-29 Bockscar carrying the "Fat Man" implosion-type device. The day before, two hundred and twenty-four B-29s had dropped conventional bombs on nearby Yahata and smoke from those fires obscured the primary target, so Bockscar was diverted to Nagasaki. Because of delays over the primary target, mission aircraft were low on fuel and had to touch down at the emergency field on Okinawa before returning to Tinian.

The 509th's new base was at Roswell Army Air Field in New Mexico, and Enola Gay arrived on November 8, 1945. In April 1946 she returned to the Pacific where she was an alternate aircraft to drop the Able test bomb during Operation Crossroads (B-29 Dave's Dream was selected for the test). The decision to retire Enola Gay for preservation was made in late July. Ownership was transferred to the Smithsonian and she was removed from the Air Force's inventory on August 30, 1946. Unfortunately, the Institution did not have large enough storage facilities to house the huge aircraft, so she was shuttled and stored at various air bases, often outdoors because of a shortage of hangar space. In 1960, the Smithsonian began dismantling the aircraft so the pieces would fit in a storage facility in Suitland, Maryland.

In the early 1980s, veterans of the 509th began lobbying to have the great aircraft restored for display. Newly appointed director of the National Air and Space Museum Walter Boyne (a former B-52 pilot for the Strategic Air Command) made restoration of the Enola Gay a priority. When now retired Brigadier General Paul Tibbets was enlisted into the restoration effort he recalled that it was a "sad meeting. [My] fond memories, and I don't mean the dropping of the bomb, were the numerous occasions I flew the airplane.... I pushed it very, very hard and it never failed me.... It was probably the most beautiful piece of machinery that any pilot ever flew."

The fuselage of the aircraft was displayed at the Smithsonian's National Air and Space Museum in 1995 for the fiftieth anniversary of the first atomic bomb drop and the end of the War. Meanwhile, restoration work on the remaining parts of the aircraft continued and the entire Enola Gay is now on display at the Steven F. Udvar-Hazy Center at Dulles International Airport in Washington D.C. 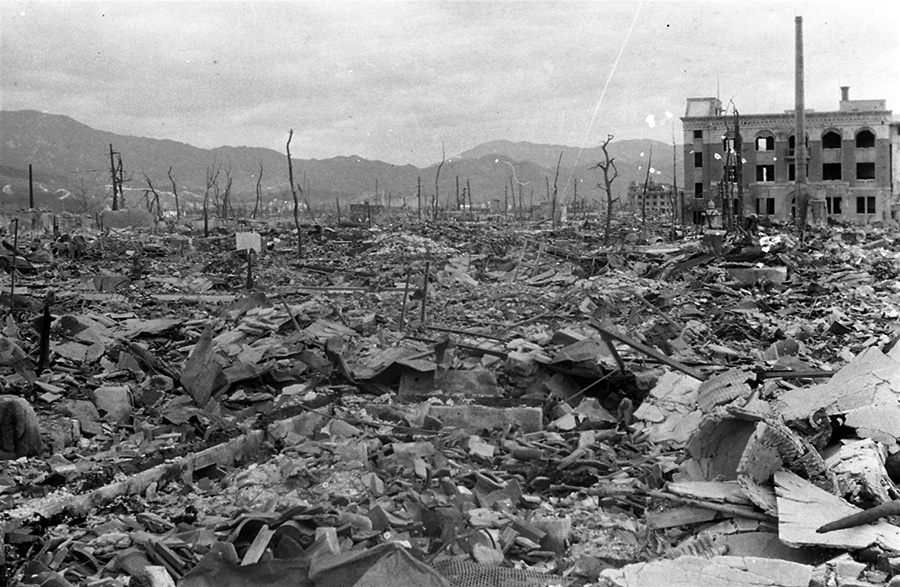