Audience members were contestants by Host Lew Valentine who would ask questions from the stage announcing "I have a gentleman (or lady), Doctor."

Choose your CD format
or order disks individually: Add to Cart Add to wishlist
Play a sample episode from January 25, 1942:

Quiz shows have always been such an important part of radio programming that it is easy to assume that they have been around forever. 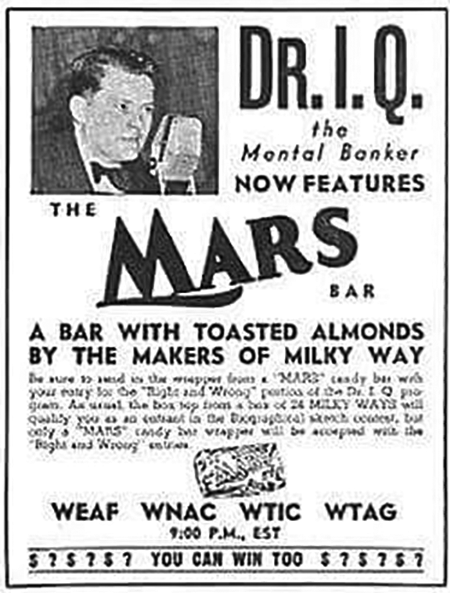 In fact, one of the very first quiz shows to be broadcast nationally was Dr. I.Q., first broadcast in April 1939 over the Blue Network. The format of Dr. I.Q. was rather straightforward as quiz shows go, but it was appealing enough to last until 1950 on the radio and was made for television during the 1953-54 and the 1958-59 seasons.

The radio version of Dr. I.Q. did not have a permanent home and was remote broadcast from theaters in various cities across the nation. Audience members were used as contestants and were asked to give their name and address. Host Lew Valentine would ask questions from the stage while his assistants carried portable microphones, announcing "I have a gentleman (or lady), Doctor". Cash prizes were handed out in silver dollars along with prizes in the form of Snickers Bars from sponsor Mars Candy.

Other features included a Biographical Sketch where the contestant was given a series of clues to identify the person, the faster the subject was guessed, the bigger the prize. "The Lady in the Balcony" quiz gave a female contestant five questions, of which she could miss up to five. If she had any misses left, she would be invited back to answer five more questions. If she could last four weeks without using all five misses, she would be awarded a jackpot prize.

The Monday night editions of Dr. I.Q. were popular enough to generate a Saturday morning spin-off. Dr. I.Q. Jr. was very similar to the adult version with a few notable exceptions, probably the biggest being instead of prizes in silver dollars, the kids were awarded silver dimes. Jackpot prizes might include Schwinn bicycles, and the contestants were asked to identify their schools instead of their address.