Home > Rare
Home > Soap Operas
91 Years Ago today in Radio History: Clara Lu and Em debuted on the radio today in 1931. One of the very first Soap Operas, Clara, Lu, and Em began as a sorority house sketch which was so popular that the sisters insisted that the actors put it on the radio. The three creators were allowed a few slots on WGN in 1930 and became so popular that they were made a part of the regular line up on January 27, 1931. The earliest episodes were hardly scripted, consisting of conversations between three housewife neighbors who chatted about anything from recipes to headlines from last night's newspaper. The show was also one of the first to offer listeners a premium if they sent in a Super Suds boxtop they would receive a spoon from the 1936 World's Fair. Today only: this collection is 10% off.

Known to be the First Soap Opera with Gossip Galore from your Three Favorite Gals!

Choose your CD format
or order disks individually: Add to Cart Add to wishlist
Play a sample episode from July 01, 1935: 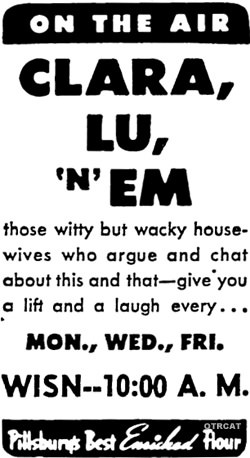 Clara, Lu and Em premiered in 1931 as the first soap opera and daytime drama to hit the airwaves. 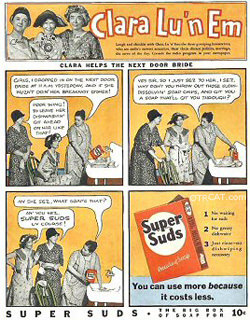 Sponsored by Colgate Palmolive, Clara, Lu and Em helped give soap operas their name, as "soaps of the day were sponsored by soap makers. Before Clara, Lu and Em came along, daytime radio programs consisted of short, fifteen minute music shows and little tidbits of gossip and household hintery.

This first soap opera was light and comedic, focusing on the daily lives and tongue wagging of three Midwestern housewives.

After one year of programming, the show became a popular five-day-a-week delight – entertaining housewives across the country and setting the standard for future daily soaps. It was created by three sorority sisters from the Northwestern University, Isabel Carothers, Louise Starkey and Helen King.