Choose your CD format
or order disks individually: Add to Cart Add to wishlist
Play a sample episode from January 06, 1950:

The typical Kiddie Cowboy program was produced to sell breakfast cereal, but The Circle Star Ranch Club went for the next meal of the kids' day, pitching sandwiches made from Bond Bread. A product of New York's General Baking Company Bond Bread was a "homogenized bread" which was in direct competition with Continental Baking Company's Wonder Bread. By 1930, the company was producing nearly 90 million loaves daily in 50 bakeries across 19 states.

One of these bakeries was located in the former facilities of Louisville, Kentucky's Whiteside Bakery at the corner of Main and 14th Streets. The mission-style building with its red tile roof and an imposing tower was a local landmark with residents recalling the perfume of baking bread wafting across the neighborhood. The local purveyors of Bond Bread were not satisfied with pleasant odors to sell their product. 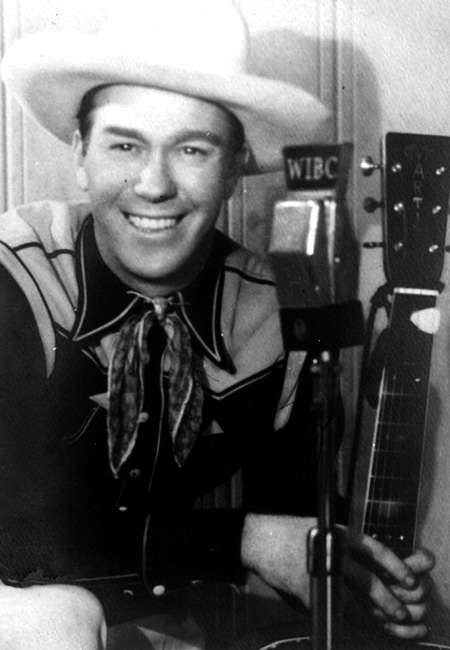 A great Singing Cowboy needs a terrific cowboy clown for a sidekick, and WHAS found one for Starkey in Tom "Cactus" Brooks. Hoping to supplement his wages from the Reynolds Metals Co., Brooks (whose brother is beloved drunken-character actor Foster Brooks) became an announcer at WHAS, but became nervous and stammered in front of the microphone. Station director Dick Fisher suggested that Brooks consider another line of work when word came that the station was looking for an "old name character to play opposite Starkey on The Circle Star Ranch. Brooks took out his false teeth, and the character of Cactus was born.

Also in Circle Star's Saturday morning lineup was a sensible young singing Cowgirl named Jane. In addition to a weekly musical number, Jane's duties included keeping Cactus from taking the show too far afield. Local kids were invited into the studio for the weekly broadcast. Each audience member was given a "Cowboy Kerchief" and a few would be interviewed on the air and win a special Cowboy Hat.

After a couple of Cowboy Songs and an extended sketch with Cactus, Starkey reads a True West story of a famous Western Outlaw. Although the deeds of these Old West Nogoodniks are not directly praised, they are held up as examples of Western Romantic Adventure. Sprinkled throughout the broadcast are reminders of how tasty and good-for-you Bond Bread is for kids and their parents.

Even The Lone Ranger was a more realistic representation of the Old West and Ranch Life, but The Circle Star Ranch was still about as much fun as you could have with a felt Cowboy Hat perched upon your noggin!