Rootin'-Tootin' cowboy tunes with an accordion back up. 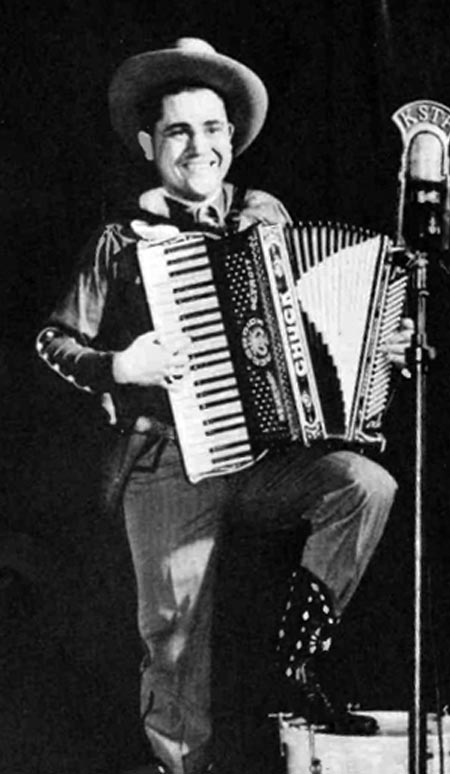 The accordion is a fascinatingly versatile and surprisingly technical musical instrument. Whether or not it makes beautiful music depends as much upon the attitude of its listeners as it does the talent and technique of its players. Notes and tones are formed on the accordion by air passing over tuned metallic reeds, causing them to vibrate, not unlike the reeds of a harmonica or a reed organ. Airflow is caused by expanding or squeezing a bellows nestled between the right and left halves of the accordion body. The right side of the body produces melodic notes and is controlled by buttons or an abbreviated piano-like keyboard, while the musician is able to provide his own accompaniment with chords played on the left side body.

First appearing in Central Europe in the early 1800s, it is not surprising that accordions began to be a part of several musical cultures, from the "Ohm-pa-pahs" of Germanic beer halls to the enticing rhythms of Latin American rhumbas and sambas. Interestingly, the accordion is considered the "national instrument" of North Korea where students gain extensive accordion training in primary and secondary school and dictator Kim Jong-Il's birthday is celebrated with accordion recitals.

Another surprising place for accordions to be heard is in Cowboy music. This off-shoot of country music is typified by the use of portable instruments, supposedly intended to soothe a nervous cattle herd on the drive to the railhead. While a fiddle, guitar, or harmonica seems like a more appropriate choice for a cowpoke's saddlebag, after the herd was sold and the cowboys had drawn their pay, accordions would have been heard in the dance halls and saloons where that hard-earned pay so quickly disappeared. Naturally, accordions were part of Hollywood's "singing cowboy" genre.

KSTP's The Sunset Valley Barn Dance during the Forties was Minnesota's answer to Nashville's Grand Ol' Opry and the WSM National Barn Dance. Chuck Mulkern and His Western Band were popular guests on Sunset Valley with Chuck and his accordion featured prominently. Mulkern also cut a number of disks for Frontier and FM Records.