Designed to be played daily between Thanksgiving and Christmas, Christmas Fantasy is a great way to enhance the spirit of the season

Part of what makes Christmastime so special is that it is more than a one-day holiday; Christmas is an entire season of happiness. We'll grant you that the commercial practice of stores putting up Christmas decorations in the weeks before Halloween is rather ridiculous. However, we know that in other areas of the world Christmas is celebrated through all the months that end with '-ber', and the season is much more spiritual than the "Buy, buy, buy!" mentality pushed by retailers. 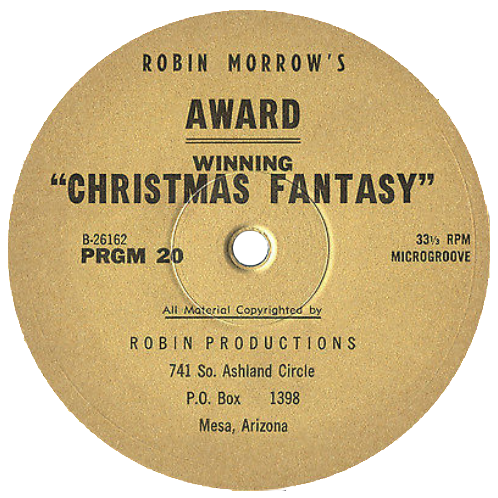 We will also concede that it can be difficult to maintain the expected level of happiness for the entire Christmas season. Being surrounded by happy people puts a lot of unnecessary pressure on some folks who feel they are letting the world down by not being as happy as expected. It is OK to not be "Up" for the entire Christmas season, but if one is willing to look there is something to feel good about.

One tactic radio broadcasters found to enhance the Christmas Season was with syndicated Christmas serials that were aired from Thanksgiving through Christmas Eve. Usually targeted to children (whose parents would be shopping at the local department stores sponsoring the show), the story's juvenile heroes would be swept off to a fantasy world where they would be tasked with saving Christmas and returning home just in time to be visited by Jolly-Old Saint Nicholas.

The traditions of The Cinnamon Bear and Jonathon Thomas and His Christmas on the Moon began in the late 1930s. In the early 'Sixties, producer Robin Morrow put together a more grown-up oriented syndication, Christmas Fantasy. Rather than a single serialized narrative, Fantasy was a collection of different stories, myths, legends linked by the Christmas theme.

Because the episodes were not linked serially, if a listener found the broadcasts in the middle of the run there was no worry about catching up with the narrative. The series was sold to regional stations on thirteen vinyl disks, with a total of 26 episodes. However, given the time period and the quality of the program, it can be assumed that Mr. Morrow employed reel-to-reel tape technology to edit and produce the episodes.

The commercial breaks are announced as 'a word from a friend' followed by a musical interlude. Although there is sufficient time for a local announcer to speak over the break with a commercial announcement, many disk jockeys employed the technique of 'slip cueing', stopping the turntable with a finger while cueing a taped commercial and releasing the player after the announcement.

In addition to producing the program, Robin Morrow narrates as well with an attractive and trustworthy baritone voice. Several of the stories are told in verse, and others in straight prose. The stories are both secular and religious, but uniformly transmit the joy of Christmas for all ages.

Orchestral, choral, and studio organ music are all presented to balance the narration. Christmas legends and stories are told in a fresh new way, and stories of the joyous season that will warm the hardest heart. Christmas Fantasy is "driveway radio" for the Yule Season.