A ringing telephone and a sexy voice answers… "Candy Matson, YU 2-8209," and then the organ swells into the theme song, "Candy." Why couldn't an intelligent, knockout of a blond get the scoop on crime as smartly as any man? Candy Matson was as good an answer as was ever on radio.

Choose your CD format
or order disks individually: Add to Cart Add to wishlist
Play a sample episode from April 04, 1949:

A ringing telephone and a sexy voice answers… "Candy Matson, YU 2-8209," and then the organ swells into the theme song, "Candy." Why couldn't an intelligent, knockout of a blond get the scoop on crime as smartly as any man? Candy Matson was as good an answer as was ever on radio. Based in San Francisco, she works from her penthouse overlooking the Golden Gate, and the Bay Area plays a great part in the show. 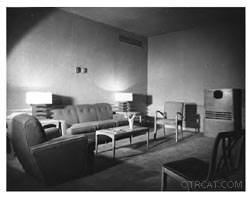 Above: Late 1940s, Early 50s Interior
of the studio KGO-KPO in San FranciscoCandy Matson was first broadcast on West Coast in March 1949. The show was created, written, produced and directed by Monty Masters for his talented wife, Natalie Parks. Natalie plays Candy smart and sassy, with a quick comeback that can smart as hard as a backhand, but just as quickly can turn sweet and softly intimate. With Candy, sweetness is not only a virtue- it's a weapon. And some don't even know what hit 'em.

Henry Leff plays Lt. Ray Mallard of the San Francisco Police, a good boy at heart. When it comes to Candy, he's willing to act like a perfect gentleman. Candy used Mallard as a heavy when she needs one, and sometimes the two run into each other working on leads from the same case. There's more between them than professional courtesy, but that's always part of the developing plot.

Candy has a good friend and accomplice in Rembrandt Watson, a middle-aged gentleman whose high-flown hyperbole bespeaks an overwrought education destined for a professorship, but sadly, Rembrandt's been reduced by time and circumstance to only a profession of portrait photography. He's played with brio by Jack Thomas. A quick whistle from Candy, and Rembrandt's there to help Candy get info or just into trouble, at which he is inherently ill suited.

Each job took Candy from her apartment on Telegraph Hill into some actual location in San Francisco. The writers, overseen by Monty, worked plenty of real Bay Area locations into every plot. Most fans think Candy Matson was the finest of all the female Private Eyes on radio, but that's like trying to promote a horse race from of a very small field. But Candy's a thoroughbred, that's for sure. Although the show ran until May 1951, it never attracted a sponsor, and remained a West Coast show. Only a limited number of episodes have surfaced. Too bad Candy's no longer taking calls, or we could call her about tracking more down.

For more detective shows, you have many great ones to choose from: Richard Diamond, Sam Spade, Phillip Marlowe, The Saint, Nero Wolfe, Nick Carter, Master Detective, Barrie Craig, Confidential Investigator and many more!