Burlesques are saucey variety shows that often include a playful strip tease and bawdy, but topical jokes.

Choose your CD format
or order disks individually: Add to Cart Add to wishlist
Play a sample episode from June 15, 1936: 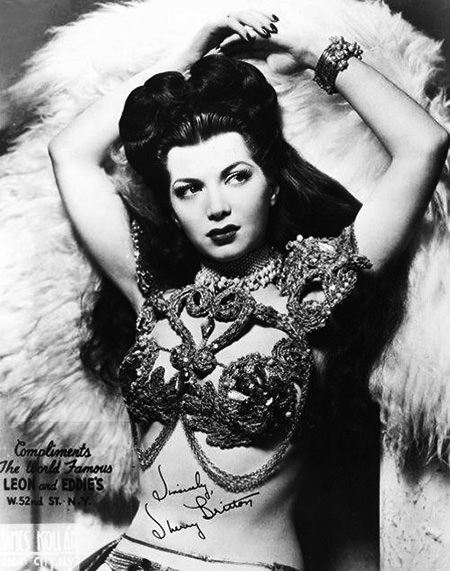 Before the rise of movies and Radio, the primary show business venues providing entertainment in American cities were the legitimate theater, vaudeville, and burlesque. Legitimate theater's traditions largely carried over into movies and to a lesser extent in radio and eventually television drama, and of course, live theater with Broadway as its capital. Vaudeville takes its name from the French term for "voice of the village" was a family-friendly form of entertainment which combined elements of minstrel shows, classical, popular, and folk music, legitimate theater, and even circus acts which moved from town to town allowing theater owners to attract audiences with the variety of their acts. This tradition of variety helped vaudeville veterans to become the backbone of Radio's Golden Age. The vaudevillians knew that they could not present the same act from week to week on the radio, and the most successful found elements which kept their audience tuning in while finding enough new material to remain fresh week after week.

Burlesque would eventually descend to become the entertainment for the rough and tumble working class, but its roots are decidedly more highbrow. Victorian burlesque was a form of variety show which gained its humor through parody and satirizing classical theater, music, and the upper classes in general. Since these early burlesques made fun of literary topics as well as those in political power, the audience needed to have a certain level of education to get the jokes. Gaining a wider audience led not so much to a "dumbing-down" of the material as widening its appeal by becoming bawdier.

This meant that the jokes became more ribald than topical, and thus burlesque

was not a show where children and families were welcomed. Burlesque houses were also willing to display attractive young women whom the audience would enjoy seeing or their own sake. Many of these girls performed as singers or dancers, but their main attraction was their alluring costumes or lack thereof. "Hoochie-Koochie" dancers became popular in North America after "Little Egypt" performed her belly dance inspired moves at the 1893 World's Columbian Exposition in Chicago.

It is thought that the strip-tease has its origins in another middle-eastern dance, namely the story of Salome and the Seven Veils from the Bible. Strip-tease's "bump and grind" tradition may have begun at Minsky's Burlesque in New York City. In 1917, dancer Mae Dix finished her number to less than enthusiastic applause, and as she walked off the stage began to remove her costume before she was hidden behind the curtain. The crowd who hardly noticed her before began clamoring for more, and Billy Minsky instructed Mae to repeat the accident the next night. As she began taking more and more of her costume off, the police "raided" Minsky's to enforce decency codes.

Burlesque operators had to walk a fine line. Although the strip-tease acts were mild by modern standards, they were deemed scandalous by the various decency boards and morality committees in the various cities. Some burlesque houses had their own acts, but many performers were part of one of the burlesque wheels. A "wheel" was analogous to a vaudeville circuit, and the biggest were the Columbia along the Eastern seaboard, the Mutual, and the Empire covering the Western US. As a wheel took a performer into new towns, they had to conform to the local decency code or face jail time. However, if the acts were too chaste the theater would lose its audience.

Although vaudeville began to fade with the rise in popularity of radio, burlesque managed to hang on until almost the middle of the twentieth century. Although the scandalous performances of the strip-tease dancers stand out in popular memory, it was really the comedians who were the big draw in burlesque, and many eventually made it into radio, TV, and the nightclub circuit. Milton Berle, Morey Amsterdam, Red Buttons, Jimmy Durante, Bert Lahr, Red Skelton, Jackie Gleason, and Bob Hope all got their start in Burlesque. However, by the end of the Great Depression, a movement was afoot to shut down burlesque in the name of public decency. Mayor Fiorello LaGuardia was able to shut down most of the burlesque houses in New York by the early 1940s.

Most of the episodes in this collection are from the 1950s, by which time burlesque was mostly gone but not forgotten. The centerpiece of most of the scripts are the lives and adventures of the dancers and the dashing heroes who rescue their fortunes and their virtues. Even if the writers could have found a way to get a strip-tease past the network censors, it is difficult to imagine it being popular on the radio.