Famous Silent and Early Talkie Cowboy Movie Star Buck Jones in a gritty and gripping tale of the Old West.

Choose your CD format
or order disks individually: Add to Cart Add to wishlist
Play a sample episode from April 21, 1937: 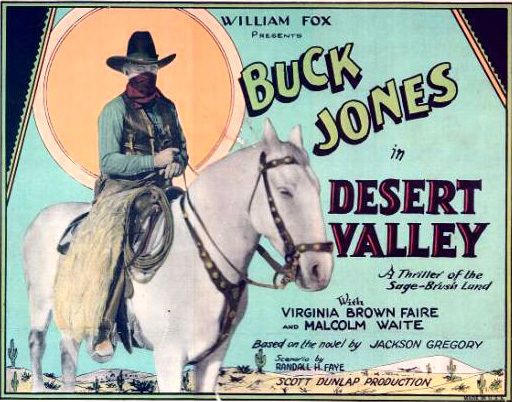 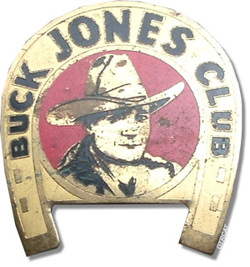 Like many of the Early Hollywood Cowboys Buck Jones had a colorful life as an actual cowboy before coming to the screen. Jones joined the Army at the age of 16 (with his mother�s permission) and was wounded in the Philippine Islands during the Moro Rebellion. After his discharge in 1909 he test drove race cars for the Marmon Motor company, but re-enlisted in 1910, hoping to become a pilot. Unfortunately flying lessons were only given to officers, so after his second Honorable Discharge from the Calvary in 1913 he took up cowboy work at Oklahoma�s 101 Ranch. He met and courted professional equestrian Dell Osborne. Because they were both low on money, the owners of the Wild West Show they were performing in offered to make their wedding part of a performance. When Dell became pregnant, Jones left the cowboy life and took a job for $5 a day as a bit player and stuntman for Universal Studios.

Jones moved among several Studios, eventually becoming Tom Mix�s back up for $150 a week. 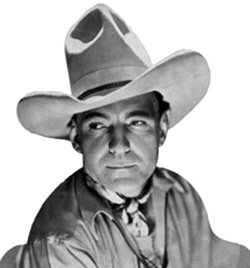 This would lead to his first starring role in 1920�s The Last Straw. Through the 20s Buck Jones was among the top Cowboy stars along with Mix, Ken Maynard, and Hoot Gibson, and appeared in more than 160 films. Jones was on of 492 victims of the 1942 Cocoanut Grove Night Club Fire. Legend has it he was trapped after returning to the blaze attempting to rescue other victims.

Hoofbeats was a syndicated Radio Production in 1937. Buck is a drifting cowboy in the movie tradition, and the program is just as dusty and gritty as any movie.

Daisy Outdoor Products issued the "Buck Jones" pump action air-rifle. One of their top-line models, The �Buck Jones Model� featured a compass and sundial in the stock. (The �Red Ryder Model Carbine� never had these features in regular production.)