A popular family act at the Grand Ol' Opry, Asher and Little Jimmie Sizemore also sold songbooks over the Airwaves

Choose your CD format
or order disks individually: Add to Cart Add to wishlist
Play a sample episode from March 12, 1936: 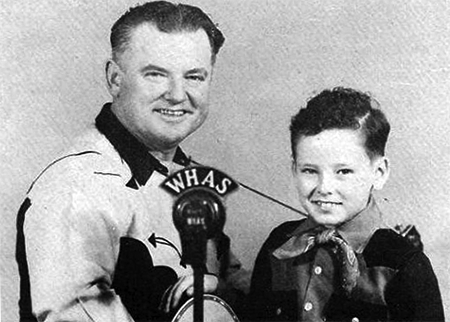 The Country Music Recording industry got its start in 1927 when A.P. Carter walked into a studio in Bristol, Tennessee with his wife, Sara, and his sister-in-law, Maybelle Carter.

Family acts appear in all musical genres, of course, but Country and Western Music have uniquely embraced the "family business" model. The original Carters disbanded after A.P. and Sara split, but Maybelle continued singing with her daughters as the Carter Sisters through the Fifties. June Carter's son with Johnny Cash, John Carter Cash is active in the music business. Mama Naomi Judd made a major splash with her daughter, Wynonna in the 1980s and 1990s. Country's original bad boy, Hank Williams raised his son, Hank Jr. on and around the stage before his passing, and Hank Williams III is making waves in the "punk-country" scene.

Although not as big an act as those listed above, the Sizemore family was an important presence during the Depression-era Grand Ol' Opry. Asher Sizemore was born in Kentucky in 1906. The ambitious young man married his sweetheart, Odessa Foley in 1923. She presented him with his first son, James, in January 1927. Although Asher found good work as a mining company bookkeeper in Pike County, he wanted to sing.

With a repertoire of Cowboy and folk songs, Sizemore took to the air in 1931 in Huntington, West Virginia before moving to WKY Cincinnati and later to WHAS Louisville. It is unclear whether the rest of the growing family had joined Asher on the road, but Little Jimmie had begun to play and built a very respectful repertoire of his own. Barely five years old, Jimmie joined his dad on WHAS and in 1932 the father/son duo began appearing on the Opry. 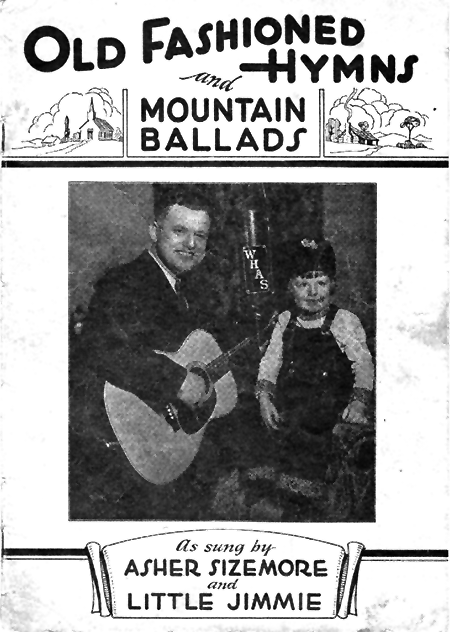 Five-year-old Jimmie was claimed to have more than 200 songs memorized. Although he sang duets with his father, the act's big draw came when the youngster performed solo. Asher and Little Jimmie appeared on The Opry almost every week in 1933 and made appearances over several weeks in each year from 1934 through 1939. In the late Thirties, Jimmie's little brother, Buddy (Charles Edward Sizemore, b. 1929) joined the act. Buddy became the group's fiddler and comedian.

Although he was an effective showman, Asher was an even better promoter and salesman than he was a performer. He hit upon the idea of publishing a series of songbooks with his and Little Jimmie's names attached. The songbooks were promoted with a series of syndicated 15-minute weekly radio broadcasts which are included in this collection. The books included Asher Sizemore and Little Jimmie's Hearth and Home Songs (1934), Asher Sizemore & Little Jimmies Songs of the Soil (1937), and Asher Sizemore & Little Jimmies Fireside Treasures (1939). Listeners could send in twenty-five cents and would be treated to several of Little Jimmie's songs, old-fashioned ballads, hymns, cowboy songs, along with "four additional complete songs" arranged for piano and guitar chords and "a large real photograph of Jimmie and his Dad".

Little sister Nancy Louis joined her father in 1950 on WKLO Louisville, about the time that Jimmie and Buddy were serving with the Army in Korea. Buddy was declared missing in action in November 1950 when the 8th Calvary was overrun by Chinese Infantry near Unsan. His body was later discovered in a mass grave and returned to his family in 2000.