She was one of the top sharp shooters and one of the many well known characters of the Buffalo Bill's Wild West Show.

The actual history of the Old West is peppered with characters whose representation in fiction and show business far outstrip what would seem likely or even possible in real life. However, there are a few characters whose real-life exploits are miles beyond what could be imagined in fiction.

Consider the example of William Frederick "Buffalo Bill" Cody. Cody grew up on the frontier and served as an Army Scout, worked as a buffalo hunter, gold prospector, a trapper, and a Pony Express rider but made his name as a character in Ned Buntline's pulp writing and later as a showman. Buffalo Bill's Wild West Show and Congress of Rough Riders did almost as much to inflate the image of the American Cowboy as would the Western Movies which would become a favored genre of Hollywood in coming decades. 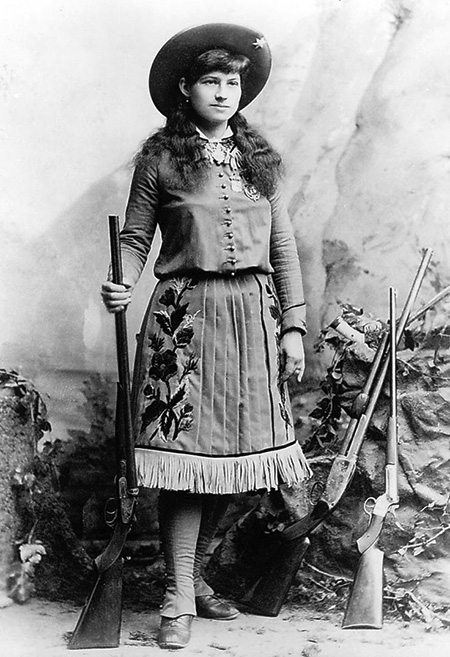 The Wild West Show was part vaudeville and part outdoor circus. The acts had a dual mission to entertain as well as glorify life on the Western Frontier. Buffalo Bill's show included historical reenactments of hunts and battles, cattle drives, and other dramatic events along with displays of showmanship. The shows would be three to four hours long and attracted crowds in the thousands. With his real-life frontier background, Cody could attract actual historical figures to join the show. These included "Wild Bill" Hickok, "Calamity Jane" Canary, and Chief Sitting Bull.

The showmanship element of The Wild West Show included fancy shooting exhibitions, and the most popular of Buffalo Bill's sharpshooters was a diminutive girl called Annie Oakley. Born Phoebe Anne Mosey in Darke County, Ohio, 1860, Annie was the sixth of her parent's nine children. Her father was a veteran of the War of 1812 and thirty-one years older than Annie's mother. After being caught in a blizzard, he passed away from pneumonia in 1866. At the age of nine, Annie was "bound out" as a servant, supposedly to take care of a nearby couple's infant son. In fact, the family abused her and treated her as a virtual slave. After running away and returning to her mother, she learned to trap and hunt to help support her mother and siblings. As a market hunter selling game to restaurants and hotels in the area, Annie was able to pay the mortgage on her mother's farm by the time she was 15.

Annie was a natural marksman who is said to have taken her first shot at the age of eight after sneaking the gun out of her mother's house to bag a squirrel. "It was a wonderful shot," she said in an interview, "going right through the head from side to side. My mother was so frightened when she learned that I had taken down the loaded gun and shot it that I was forbidden to touch it again for eight months". On Thanksgiving Day 1875, she entered an exhibition shooting match against professional marksman Frank Butler. Each took 25 shots before Butler missed the target, losing the competition and a $100 wager. Rather than feeling emasculated, Butler was intrigued by the sharpshooting beauty and began courting her. They married the following year.

The couple settled in Cincinnati an Annie took the name of a local neighborhood as a stage name. They worked as exhibition shooters before being invited to join the Buffalo Bill's Wild West in 1885. When Sitting Bull met Annie he was impressed not only with her skills but her modesty and respect for others as well. It is reported that he paid $65 to have a photograph made of himself and 5-foot-tall Annie, and the chief adopted her as an honorary daughter, naming her "Watanya Cicilla", which was interpreted as "Little Sure Shot". 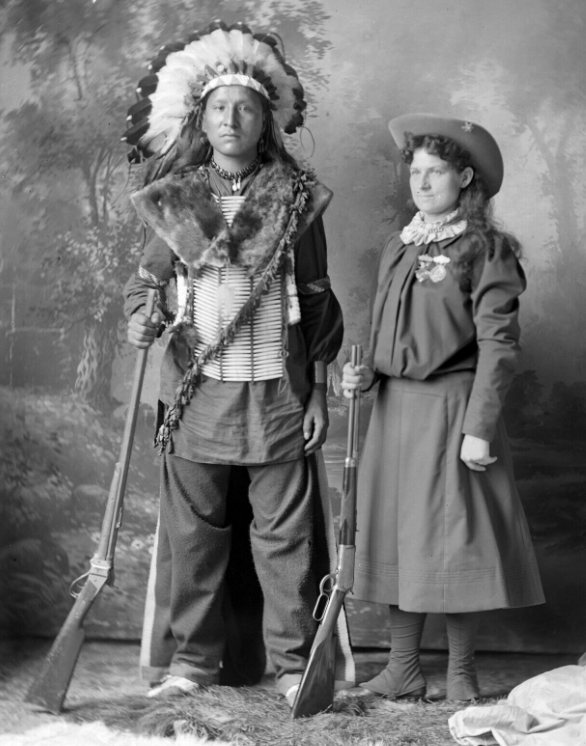 Annie was soon the biggest name in the Wild West Show after Buffalo Bill himself. Bill took the show to Europe in 1889 for the Exposition Universelle in Paris, and while in Europe Annie performed for Queen Victoria, King Umberto of Italy, President Carnot of France, and supposedly shot the ashes off a cigarette held by newly-crowned Kaiser Wilhelm II of Germany.

Oakley was an ardent supporter of women learning to shoot, both for sport and defense. As the country appeared to be approaching War with Spain, she wrote to President McKinley offering the services of "50 'lady sharpshooters' who would provide their own arms and ammunition" should the country go to war with Spain. Although Annie's offer was declined, Theodore Roosevelt chose the name "Rough Riders" for his volunteer cavalry unit after Buffalo Bill's show.

Annie left the Wild West show in 1901 after the train carrying the show from Charlotte, North Carolina, to Danville, Virginia, was struck by a freight train. 110 horses were killed or had to be put down because of the incident, and although there were no human fatalities, Annie was left temporarily paralyzed and told she would never walk again. After undergoing a number of spinal surgeries, she not only regained the ability to walk but starred in a stage production, The Western Girl, as the heroine who foils the bad-guys using a pistol, rifle, and rope.

Annie and husband Frank Butler built a brick ranch-style house in Cambridge, Maryland, in 1912. She continued to win competitions and set marksmanship records into her sixties. However, her health began to decline, and she succumbed to pernicious anemia on November 3, 1926. She was 66 and had been married to Butler for fifty years. After Annie's passing, he lost the will to live, stopped eating, and died 18 days after she did. 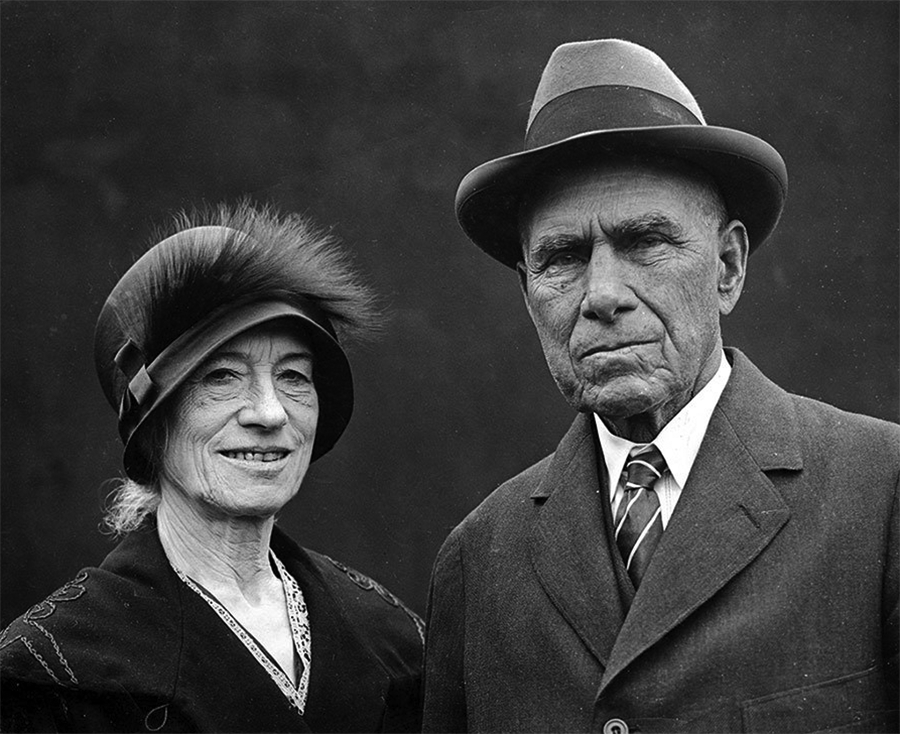