The Western became a staple of the Silent Film era for several reasons. Audiences loved them because they had a lot of action, thrilling characters and situations, and thanks to the Black Hat versus White Hat trope they were easy to follow. Producers were enthused by the Western genre because audiences were so willing to buy tickets for films that were relatively cheap and easy to make. A fun element of the trope was that, especially in pre-Hayes Code Hollywood, villains could be very compelling characters. 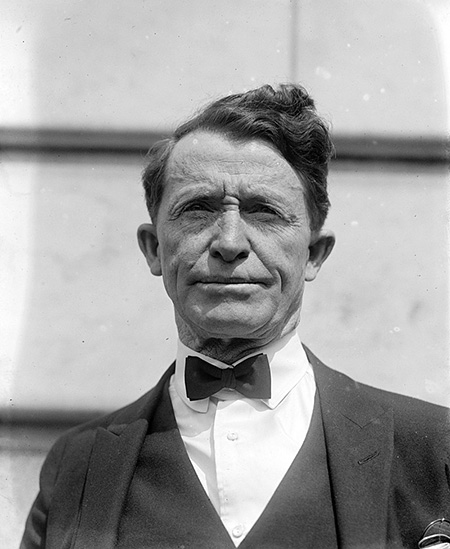 Part of the reason that Westerns were so simple to make was that, as the Frontier of the Old West was drawing to a close in the early part of the Twentieth Century there was a glut of under-employed Cowboys who were willing, even anxious to display their skills for the camera. What might be surprising was that there was a genuine Western Outlaw who was ready to make a screen career, "Dangerous" Al Jennings.

Jennings got his start as an attorney in the Oklahoma Territory during the 1890s where he opened a law practice with his brothers, Ed and John. The boys' father was Judge J.D.F. Jennings, a surgeon for the Confederate Army before practicing law in Colorado. The Jennings boys' practice in Oklahoma hit a snag when they faced a case opposite Temple Lea Houston. The son of the first President of the Republic of Texas, Houston was an accomplished trial lawyer but also a serious gunslinger. The case with the Jennings became heated and that evening the arguments left the courtroom, leaving Ed Jennings dead and Houston facing murder charges (which he beat).

The death of his brother left Al with an unfavorable attitude toward the legal profession and lawfulness in general. He began his outlaw career when brother Frank found a pair of false US Marshall badges and used them to charge fees on herders using federal land. Al and Frank soon moved beyond con games and recruited outlaws Little Dick West, Dynamite Dick Clifton, and the O'Malley Brothers to form the Jennings Gang of train and bank robbers.

Unfortunately, the Gang was not very good at crime. During one of their early jobs, Al stood in the middle of the tracks, waving a lantern and firing his pistol into the air to get the train to stop. It did not and Al was nearly run down. Next, they boarded the train while it was stopped at the station. The robbers went to the safe in the freight car and tried to get it to open by shooting the lock. The safe would not open, so the gang decided to rob the passengers. The take was only a bottle of whiskey and a bunch of bananas. 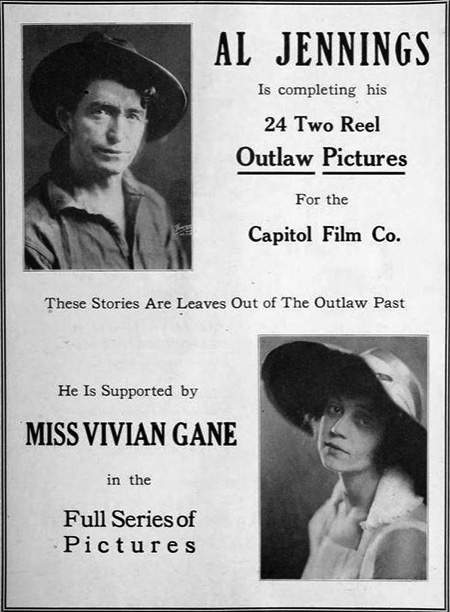 The Jennings Gang soon broke up. Given their demonstrated level of competence as Jennings brothers were arrested and Al was sentenced to life in federal prison. While serving at Leavenworth, Al befriended an embezzling bank teller named William S. Porter. Inspired in part by stories Jennings had shared with him, Porter would become the prolific and popular short story writer O. Henry.

Judge Jennings convinced his friend, President Theodore Roosevelt to grant Al a full pardon in 1904. Al returned to Oklahoma where he would marry and make an unsuccessful bid for Governor ("If elected, I promise to be honest for a year, if I can hold out that long!").

After retiring from politics, Jennings moved to California to conquer the film industry. He always had an entertaining story, although of sometimes questionable believability at the ready, which made him a popular interview subject. One such story had to do with the time he bested Jesse James in a shooting contest. Jennings was surely the better shot, considering that the legendary Confederate outlaw had been dead for some years when the encounter took place.

Al dipped his toe again into the legal profession at the age of 82. In 1945, he sued the producers of The Lone Ranger over an episode where a disguised Ranger foiled a bank robbery by the Jennings Gang. "They had this Lone Ranger shooting a gun out of my hand, and me an expert", he complained to the jury, who were entertained by Jennings' tales but still found in favor of the Masked Man.

Although never an A-list talent, Al Jennings appeared in and consulted on more than 100 films. He put together enough money to buy a small ranch in Tarzana, California, where he lived with Maude, his beloved "little woman" (Maude Jennings stood half a foot taller than Al's 5'1"). Maude passed away in November 1961. Heartbroken, Al Jennings went to 'the last roundup' on the day after Christmas 1961. He was 98.