Aileen Pringle was an American stage and film actress during the silent film era who was the personification of the exotic siren of the 1920's.

Hollywood probably would have never become a glamor capital if not for the rise of flapper culture. The flapper was a product of the Jazz Age as well as an outgrowth of the movement to grant women the right to vote. Granted the right to exercise their political rights, women took on a new sense of independence, but the dowdy suffragettes of the Victorian era would have gasped at the thought of becoming a free-spirited flapper girl.

Although their behavior was meant to shock and scandalize proper society, the independence displayed by flappers allowed women to enter into Hollywood’s studio system. A protected "Gibson Girl" from the previous generation may have been the topic of a Hollywood picture, but it is hard to imagine her going to work at a studio. 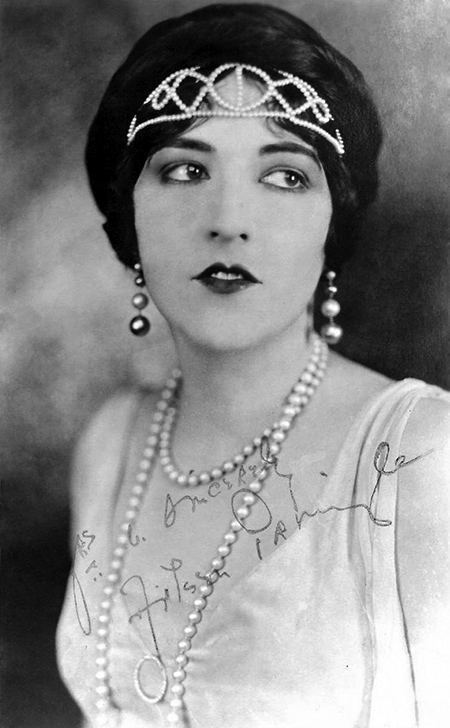 Aileen Bisbee was born into San Francisco’s high society in 1895. Her father, George Bisbee, was president of the Pioneer Fruit Company and was able to send his daughter to be educated at private schools in Europe. She won the eye of Charles McKenzie Pringle, son of a titled British Jamaican landowner and member of the Jamaican Privy Council. Soon after they were married, Aileen took up acting.

One of her first prominent roles was opposite Rudolph Valentino in Stolen Memories (1920). She enjoyed moderate success as her career grew, but her break came when her dear friend and romance novelist Elinor Glyn selected her to play the lead in the silent film adaptation of her novel Three Weeks (1924). Glyn had helped to popularize the concept of the "It girl", and Three Weeks was to be a "Lady Chatterley’s Lover sort of thing". Comic Joe Frisco said "Leave me get this straight. You want to find some tramp that don't look like a tramp, to play that English tramp in your picture. But take it from me, that kind of tramp don't hang out in Hollywood".

In 1924, Aileen was involved in the scandal aboard William Randolph Hearst’s yacht Oneida. A party had been scheduled aboard the yacht to celebrate the birthday of producer Thomas H. Ince. In addition to Ince and Aileen, in attendance were silent film star Marion Davies (who was also Hearst’s mistress), gossip columnist Louella Parsons, Elinor Glyn, and Charlie Chaplin (who was allegedly having an affair with Ms. Davies). At dinner, Ince imbibed heavily of champagne and salted almonds, both of which he was forbidden due to ulcers. He was soon struck with severe gastrointestinal distress and taken ashore where he died. Rumors began to circulate that a jealous Hearst had taken a shot at Chaplin, missed, and hit Ince who died of his wounds and became the subject of a huge cover-up. Supposedly, the event helped to secure Louella Parson’s power as a Hollywood gossip columnist (she was working for the Hearst Syndicate at the time). Pringle’s reputation was not smeared by the scandal.

Aileen began divorce proceedings against Charles Pringle in 1926, and was expected to become Mrs. H.L. Mencken, but Mencken married noted suffragette Sara Haardt. Although not popular with the Hollywood set, Aileen was "the Darling of the Intelligentsia" for her friendship with Mencken and several other artistic and literary figures. In 1944, she married writer James M. Cain, creator of The Postman Always Rings Twice and Double Indemnity. The marriage was a rocky one and ended in divorce after two years.

Aileen retired from films by the end of the decade and lived in wealthy retirement in New York City where she died in 1989. She was 94. A Star on the Hollywood Walk of Fame at 6723 Hollywood Blvd honors Aileen Pringle’s contributions to Motion Pictures.