During the 1940s and very early 1950s, one of my favorite radio shows was a weekly series called Big Town. Every Tuesday night, I would "fire up" my grandmother's old Emerson-brand, table-model radio and tune in to the show. That show, during the time I listened to it, featured a man named Edward Joel Pawley in the starring role of Steve Wilson, the fighting editor of the Illustrated Press. Fran Carlon starred as his "sidekick", Lorelei Kilbourne. I later found out that the show had earlier starred Edward G. Robinson and Claire Trevor in those respective roles before I became a fan. Mr. Robinson played the role of Steve Wilson from 1937 through 1942. Mr. Pawley took over from Mr. Robinson in 1943 and played the role until it's demise in 1952. The show garnered the highest ratings in radio at one point during the time Mr. Pawley was playing Steve Wilson. 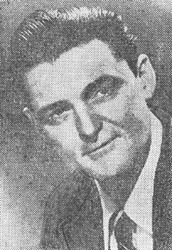 Like Mr. Robinson, Edward Joel Pawley was also a movie actor before starring on the Big Town radio program. He was primarily known in the motion picture industry as a "character actor", but he acted in some of the better-known movies of the 1930s and early 1940s. For example, in 1935 he played in the movie "G-Men" starring James Cagney, and he played Humphrey Bogart's partner in the movie "The Oklahoma Kid" which also starred James Cagney. He also played Mickey Rooney's father in the movie "Hoosier School Boy", and acted in other movies such as the original "Treasure Island" in 1932 (starring Wallace Beery & Jackie Cooper), "Thirteen Women" (starring Myrna Loy and Irene Dunn), "Tess of the Storm Country" (starring Janet Gaynor and Chareles Farrell), and "Angels With Dirty Faces" in 1938 (starring James Cagney). All told, he acted in over 50 movies. A little known fact is that Mr. Pawley and Mr. Robinson competed for the starring role in the movie titled "Two Seconds" which was originally a Broadway play in which Mr. Pawley had acted. Mr. Robinson got the part, and Mr. Pawley would, in later years, laughingly state that he lost his chance to become a big Hollywood star!

Physically speaking, Mr. Pawley was just the opposite of Mr. Robinson. He was rather tall with rugged good looks, a thick head of black hair, and a deep, resonant, baritone voice. He was also a wonderful gentleman and a true patriot. He and his first wife (Martina) had a son named Martin, but they divorced some years later. His second wife was the former Helen Shipman who acted and sang in Broadway plays and who introduced, on stage, the famous song titled "My Little Alice Bluegown." Like Mr. Pawley, she too was a wonderful and warm person. The two first met in a stage play aptly titled "Life Is Like That."

I became acquainted with the Pawleys in 1949 when they moved from New York (Rockland County) to my rural area of Virginia (Rappahannock County) . He commuted back and forth to New York during those three remaining years of the show. You can imagine the thrill of a young country boy of 12 actually getting to meet, face-to-face, with one of his radio show heroes! The Pawleys were very gracious and invited me to their home for a visit, the first of many to follow. Mr. Pawley had some fabulous stories to relate concerning his professional life... first as a stage actor (he played the role of Elmer Gantry in the original stage play of the same name), then as a movie actor in Hollywood , and finally as a national radio personality in New York. I, of course, hung on every word he said and was thoroughly delighted that he would share with me some of his past adventures. 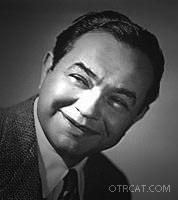 Mr. Pawley seemed to be an honest man because he told me things which most people would not want others to know. For example, many years after leaving Big Town he told me one day that he was too proud to go on interviews for other work, so he waited for people to call him. The calls, he said, unfortunately never came, so he went in to retirement at the ripe old age of 51 ! He began raising goats and making honey just for something to do. He used to laughingly refer to himself as a "Gentleman Farmer." He also appeared to be a rather religious person because he was an avid fan of the early TV show featuring Bishop Fulton J. Sheen. The program aired on Tuesday nights back in the early 1950s.... the same night that Big Town used to air on radio. The Pawleys had a floor model television which, to my knowledge, was the first one in our area.

In 1959, I began working for a small radio station in Culpeper, Virgina as a weekend announcer in order to help pay for my schooling at The University of Virginia. Mr. Pawley would come by on occasion to visit with me, and I could tell that his heart was still in the radio business! Now comes the ironic part of this story. When I graduated from the University in 1963, my new full-time job as a Civil Engineering graduate required me to relocate in another area of the State. As a consequence, I had to give up my job as a weekend announcer at the radio station. Guess to whom I turned over my station door key on my last day at work? Yep, it was Mr. Pawley, my childhood radio hero, who was hired as MY replacement!! I have often wondered if that particular scenario has ever played out at any other time in the history of radio.

I must say that I had mixed emotions about this turn of events. It pained me to see a man of Edward Pawley's stature working at a small radio station in rural Virginia, but, on the other hand, I was very happy to see him back in the medium of radio and knowing that he was happy to be back! After he became a great grandfather, he used to laughingly say that he was "the great grandfather of disc jockeys!"

Much to my sadness, Mr. Pawley passed away on January 27, 1988 at the University of Virginia hospital in Charlottesville, Virginia. His passing was, to my knowledge, noted only by the local newspapers with no national attention. He was buried alongside his loving wife, Helen (who had predeceased him), in Rappahannock County, Virginia. His only child, Martin H. Pawley, currently lives in Oregon.I began a search in the early 1980s for any tapes which might exist of the Big Town radio shows in which Mr. Pawley starred. After a long search period, I finally located a man in Ilinois who had cassette tape recordings of four of the shows. I was thrilled not only because I wanted to hear them, but also because I wanted to present copies to Mr. Pawley. I knew that he did not have any tapes of his shows, so I thought he would like to have them. When I visited with he and his wife at their home to give him the tapes, I already had one of the tapes queued up in my portable tape recorder. I told him that I had a present for him, and when he saw the tape recorder, I think he thought that the recorder was the present! As a consequence, I quickly told him that I wanted him to listen to something. When I started the tape and he heard his voice barking out the famous "Flaming Sword" intro to the show, tears welled up in his eyes. The expression on his face was that of one who couldn't quite believe what he was hearing! It was the first time Mr. Pawley had heard one of his Big Town radio broadcasts since he left the show in 1952! He thanked me profusely for the tapes, but the look on his face and the tears in his eyes were all the thanks that I needed.

Edward Pawley was as big in real life as he was in the character of Steve Wilson. You had to know him to understand the depth of the man ( he also wrote poetry! ), and I wish everyone could have had the opportunity to know Mr. Pawley as I came to know him.

Spoiler : Just wanted you to know how much I appreciate your e-mails & nesletters. With all the glut of SPAM on the Internet today, I still really enjoy hearing from you. I have ordered several CD's of radio programs from you. Have enjoyed every single one. While I don't have any "Old Time radio stories" , I can imagine how the folks were back in the 1930's on the Prarie of just in the plain good old USA when radio was king! Keep up the good work!