Jim Jordan has never received adequate recognition for his skills as a resourceful actor in his role as Fibber McGee. Fred Allen’s status as a brilliant ad-libber is well-documented, yet Jim could fire off a spontaneous line with the best of them. It is this talent of the quick quip that is noted in the comments of no less than 45 episodes in the Revised and Enlarged Edition of my book, Fibber McGee and Molly: On the Air 1935-1959. A sampling of Jordan’s improvised lines follow to give listeners a taste of the ready wit he displayed frequently on one of radio’s most famous programs. 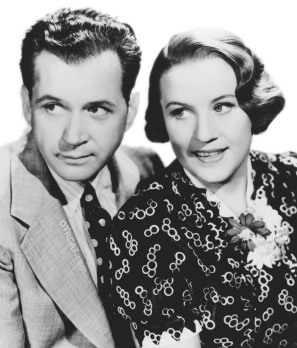 Although few people would mention Fibber McGee and the melancholy Dane in the same breath, cheerful Jim Jordan and moody Hamlet were more kin than unkind when something was rotten in the state of comedy or Denmark. Hamlet groused about the time being out of joint and being cursed that he had to set it right. When the program’s timing was thrown off course, Jordan immediately stepped in with a rapier-sharp parry.

On January 16, 1940 Jim provided an ad-lib in response to the Old Timer’s inquiry about what the McGees have been doing: "Waiting for a sound effect." On November 30, 1948 Jordan turned a mistake by the sound effects man who needed three cracks at a bulb into the biggest laugh of the night: "It finally broke." When the recorded background noise ended too abruptly on December 4,1951, Jim was right there with an ad-lib of "Hey, where’d the crowd go? Must have a lot of union customers in here."

But it was not something in the wings that brought out the best in Jordan. Hamlet advised? actors to speak their speeches trippingly on the tongue. Actors who tripped over their tongues on Fibber McGee and Molly could count on Jimmy on the spot to turn fluffs into fun.

On December 24, 1940 after Jordan did not pronounce succession exactly correct, he had a great comeback to Molly’s remark that they didn’t have any records to play: "We got that broken one we just did."? Two weeks later Jim tossed in a relevant zinger when Marian’s voice cracked while overacting to emphasize her discomfort and hunger: "Tomorrow night, East Lynne," a reference to the sentimental melodrama. Another ad-lib slips by amid the laughter after Marian muffed "last quarter" instead of "lost quarter" when Jim chimed in with "Lost it in the first quarter [of the show]." Barely another fortnight passed before Jim recovered from his fluff on the word now with an apposite comment: "It’s hard to play piano and talk at the same time." After his flub on October 29, 1946, Jim countered Molly’s question "Is there some chapter in your life I skipped?" with an impromptu mea culpa: ?"I think I skipped one." In April 1941 Jordan rebounded from a fluff with a handy ad-lib, "As the man said when he stuck his hand in the alphabet soup, I’m groping for words"? and delivered an apt comeback after he stumbled over a compliment to Abigail Uppington and she returned the favor by claiming he always says such sweet things: "I have a tough time doing it though."????

Jordan knew how to breathe life into jokes that misfired badly. On December 10, 1940 Jim’s ad-lib after the Myrt bit fizzled proved better than the gag: "Yes, it laid there." On March 30, 1943 after Molly’s wheeze about crooked parts and her uncle’s barber shop got a mild reaction, Jordan had a ready response to her question of "What do we do now?": "Just stand and wait I guess." On December 19, 1944 when Alice Darling’s joke about a hairdo "that is more trouble than it’s worth" proved to be DOA, Jim’s ad-lib about the misfire was instantaneous: "Yes, I think so, too." After a joke misfired on November 20, 1945, Jim ad-libbed that he and Molly "won’t have to go to Carstie’s Thanksgiving. We’re having our turkey now." More than once Jim’s improvised lines transformed low spots into highlights. On January 15, 1946 he earned the biggest laugh of the night when, after his fit of fear elicited a tepid response, he added, "All that effort for that."? Ditto for the March 26, 1946 episode when he turned a gag that hatched an egg into a crowd-pleaser with the ad-lib "I’d have sworn that was a joke." Listen to the May 13, 1947 and May 11, 1948 episodes to hear how members of the cast got a bigger kick out of Jim’s ad-libs than the audience did. The players liked to join the unscheduled hilarity by feeding off Jim’s improvisations such as on October 2, 1951 when he stumbled over a phrase and magnified the booboo with a repetition of "way-way-way," promptly Harlow Wilcox to echo the effect with "I’ll be happy-happy-happy to."

Listeners who attend carefully to episodes of Fibber McGee and Molly for instances of miscues turned into merriment by Jolly Jim Jordan will also be happy-happy-happy, ready to grant proper homage, not to an indecisive Prince of Denmark, but to the clever Squire of Wistful Vista: "Now wisecracks an agile wit."??

Be the first to comment on "Ad-Libber McGee and Molly"